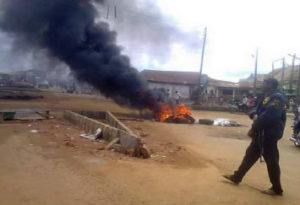 A bloody communal clash between the people of Isu clan in Arochukwu Local Government Area of Abia State and their neighbours from Utuma in Biase Local Government Area of Cross River State is feared to have left 10 persons dead and scores of houses reportedly set ablaze.
The bloody clash which was said to have erupted last week Wednesday has reportedly left the Abia community deserted as the people were said to have fled the community. Consequently, the people of Isu have sent a save our soul, SOS, to the Abia State Government to urgently rescue them from being wiped out by Utuma people.
According to a community leader from Isu , Hon. Nicholas Igwe Kalu, “over 10 persons have been killed in the fracas while several houses have been torched in Isu clan. ” But the police disputed the claim, saying no death was recorded and that only a farm hut was partly burnt. The State Commissioner of Police, Mr. Anthony Ogbizi who confirmed the crisis said however that the area is now calm and that his command and his Cross River State counterpart have stationed their men there to ensure that peace reigned.
He disputed the claim of Isu people that one of their persons was still being held, saying he had challenged them to name the person. Igwe Kalu traced the crisis to an on-going road grading being executed by the Ibeto Group, an indigenous firm interested in the development of lime stone said to have been discovered in Isu. ”
Utuma people became more hostile to my people since the discovery of lime stone in the area was made public and Utuma people, in collaboration with people from Biase, abducted some members of my community.” According to him, they were disrupting the road project in Isu, pointing out that Isu people sent emissaries to them and appealed to them to allow the work to go on and even promised to persuade the company to assist them if they desired.
He admitted that in reaction, Isu people also abducted some Utuma people but explained that both sides released their captives following the intervention of the police and the military. “After that, they went and reinforced and launched an unprovoked attack with sophisticated weapons, killing and destroying houses. The casualties we have recorded in this attack are only on our own side. If the government fails to intervene immediately, our clan may be wiped out.
“We want the government to bring the National Boundary Commission to, as a matter of urgency, come and demarcate our boundary with Cross River State as the best permanent solution to constant clashes between us and the Cross River people,” Kalu said. Giving details of the crisis, CP Ogbizi said that his command was first informed of the crisis on April 17 and he quickly dispatched his men to maintain order in the area.
“However, on Saturday, we got calls from Senator Mao Ohuabunwa, the deputy governor and many others that there was communal clash in the area. We raced there to dominate the place.”
Share