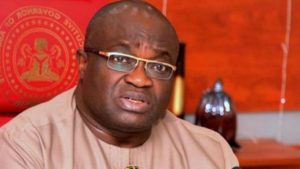 Ahead of the 2019 general elections, the governorship candidate of the All Progressives Congress, APC, in Abia State, Dr. Uchechukwu Ogah, has stated that the people of state were waiting eagerly to sweep away the ruling Peoples Democratic Party-led government in the state.
He vowed that the APC will resist any attempt by the PDP-led administration in the state, to manipulate the upcoming 2019 governorship election.

Ogah, however, assured that he will not fail if he is elected as Abia Governor, pointing out that he would work and ensure that dividends of democracy were brought to the doorsteps of Abia masses.
The APC chieftain stated this while addressing APC members and supporters in Umuahia, the state capital on Monday, decried the dilapidated state of infrastructures in Abia state,promising to turn around the state’s economy.

He said, “For the past 20 years, Abians have been struggling for survival. Because of the joblessness in state, people are suffering.

“We are determined to sweep away bad governance in Abia. We will protect our votes. We will not allow anybody to write results.
“If you go to Aba now, everywhere stinks, smelling. Due to the dirty nature of Aba environment today, people are contacting cholera diseases.

“I want to assure you that immediately we take over the government house, Julius Berger will start working Aba immediately. Aba, which is the commercial nerve centre of the state will be fixed within two years of our administration”.