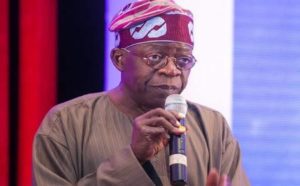 The National Leader of the All Progressives Congress, APC, Asiwaju Bola Ahmed Tinubu, has urged the people of the South West to take vengeance through their votes on Nigeria’s former president, Olusegun Obasanjo, over his alleged roles in election rigging in the country.
The former Lagos State Governor, who stated this at the campaign rally of the President Muhammadu Buhari re-election bid in Akure, the Ondo State capital, maintained that Obasanjo and the Peoples Democratic Party, PDP should not be trusted going by what he said they have allegedly done in the past.

“They are the master riggers, vote for progress, vote for your children, for better tomorrow.

Tinubu, who appreciated the gesture of the people of Ondo State shown to APC in 2015, urged them to again maintain their stand at the poll with their votes.
“When Nigeria was drifting apart by the bad leadership of the PDP, you (people of Ondo State) stood solidly behind the Change project which liberated the country in 2015.

“We believe in President Muhammadu Buhari. Now with Buhari, we are building infrastructure; the electricity project is on going, which is already boosting the country’s industrialization.

“On February 16, stay with your votes, don’t allow them to rig the votes. Go and vote for APC, and the youth, don’t be deceived, only APC can do it for you,” Tinubu stated.