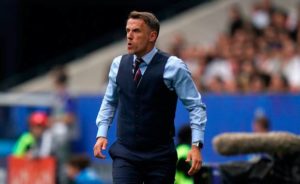 Phil Neville, Coach of English football team in ongoing FIFA Women World Cup in France, says the players have taken the team where it wants to be.
They are “right where they want to be,” he said after the team secured victory over Japan and progressed to the knockout stages as group winners.
Forward, Ellen White, scored in both halves of the game as England beat 2011 champions, Japan, 2-0 in Nice to secure top spot in Group D with a perfect record.
“We got another clean sheet, won another game and we’ve played three and won three.
“We’re where we want to be – in the last 16 and ready to attack the business end of the tournament,” Neville told reporters.
The Lionesses showed signs of fatigue, with intensity levels dropping in the second half as they struggled to press their opponents, but Neville said he would not change the team’s style for the knockout stages.
He added: “In the second half, because we were so open and fatigued, we probably got exposed a little bit. But, the style is non-negotiable however far we go.
“When you get to last 16 it’s about winning. We place a big emphasis on winning as we like to play in a certain style”
England’s round-of-16 match will be held in Valenciennes on Sunday, but the Lionesses will only find out who they are facing after the final round of group games.