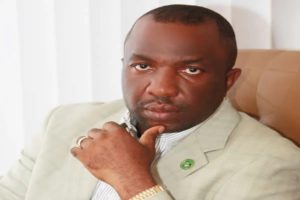 National Chairman of the African Democratic Congress, ADC, Chief Ralphs Okey Nwosu, has said that by handing his campaign over to National Leader of the All Progressives Congress, APC, President Muhammadu Buhari has again shown that he was cloned.
Nwosu was quoted by the Guardian as saying that the President’s action was scandalous, noting that, “There are three ways one can explain this: It is the character of the man to shirk responsibility or we have a zombie in the Villa, whom the cabals are in complete control of, or this whole clone or body-double thing is not a mirage. Certainly, something is wrong.”

Nwosu, who also claimed that Buhari was never available for those who elected him, noted that the nation has been governed by proxies for the last few years.
He continued, “First the rumours of body-doubles and cloned Villa occupants, and now they are no longer disguising or pretentious about it. It has been made clear that Tinubu doubles for Buhari when campaigning to capture power.

“The nation has been governed by proxies for the last few years and APC has allowed it. So, it is left to the Nigerian voters and people to decide during the elections.

“Buhari is never available to the people who elected him. This is why leaders of other nations treat us with contempt. Political leaders and investors all over the world mock us all the time.
“How low could governance get? All indicators score Buhari’s government as the lowest since the Nigerian nation was founded.”