2019 presidency: Why Ohanaeze has not endorsed Atiku – Iwuanyanwu 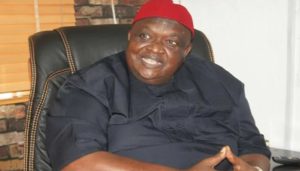 A member of the Peoples Democratic Party, PDP, Board of Trustees (BoT), Chief Emmanuel Iwuanyanwu has said that leading Igbo socio-political organization, Ohanaeze Ndigbo, has not endorsed any presidential candidate ahead of the 2019 election because not every Igbo man is a member of PDP.
Iwuanyanwu was reacting to the recent endorsement of Atiku Abubakar/Peter Obi Presidency by Igbo leaders.

The endorsement has elicited diverse reactions, but the frontline Igbo leader told Sun that Ohanaeze only endorsed PDP Vice presidential candidate, Peter Obi.
He, however, noted that having endorsed Obi, there were indications that Ohanaeze would also endorse Atiku in January.

He said, “Yes, Obi is a person whose credential is excellent. Generally, Igbo leaders have endorsed him, but Ohanaeze has only endorsed Obi and many Igbo groups and the churches have endorsed Atiku/Obi.

“Anybody that has come close to Peter Obi would know that he is a very honest, humble and resourceful person; a patriotic man.
“Now Atiku, not every Igbo man is in PDP because Atiku is in PDP, Ohanaeze President General told us that they will meet sometime in January next year; they would now finally decide who to vote for, but I can tell you from all indications, since they have endorsed Peter Obi, it also appears that they would endorse Atiku.

@@dailyrecordng
Previous ASUU strike: FG reveals when students will return to class
Next Atiku Asks Buhari to Resign over State of Economy