2023: “My Dream For A United Nigeria Driving Me Crazy” – Okorocha 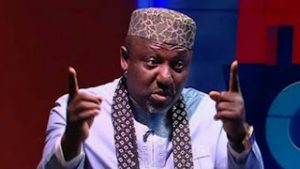 Former Governor of Imo State and SENATOR representing Imo West, Rochas Okorocha, has said his vision for a united Nigeria is driving him crazy.

Okorocha spoke during a media chat with the federal capital territory (FCT) chapter of the Nigerian Union of Journalists (NUJ).

The FCT NUJ hosted the former governor of Imo state to commemorate his forthcoming 59th birthday.

Responding to a question on whether he would run for the presidency in 2023, the senator said: “I don’t have the ambition to be president but a vision to have a united Nigeria and that is driving me crazy.”

The senator called on women to fight for power, stressing that they are the more intelligent gender

“African woman is so great but we treat them as if they are a second class citizen meant to serve the man but they don’t understand that a woman is first a man before becoming a woman,” he said.

“A woman is an extra man; they should have been called a man but because they has a womb that is why they are called a woman.

“They see farther than we can see and they understand better. If all women are empowered and there is financial sustainability for women, we can’t have insurgency.

“Insurgency is as a result of children taken out of their mothers because she doesn’t have the resources to keep them.

“So, women must be given a place of importance and position. But what I understand is that women want to sit and beg for power. Power is not given, power is taken.

“Women must rise and if you don’t start contesting for president they will not give you a reason to run for governor.”