Vice President Yemi Osinbajo on Sunday urged millions of Nigerians angry over the slaughter of innocent victims by the calamitous herdsmen to remain calm and not seek revenge.

Osinbajo also said that politicization of these tragedies, will put the nation’s unity and stability in danger.

“But we recognized that as dangerous and deadly as heartless as these killings are, is also the danger of allowing politics to play a part and to sometimes as they say pour petrol into already burning fire. 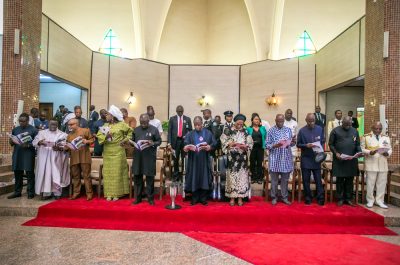 “Again we have seen some today who want to benefit politically. The killing of women and children in Adamawa, Benue, Jos and several other places, stoking the embers of ethnicity and religion. By their hate speeches they want to fix their criminal acts of a few individuals on the whole tribe and a whole people and will want to create religious crisis if we allow.

“Our obligation is to stop them from playing dangerous politics that could threatened our unity and stability,  just as we continue to enforce the peace in the troubled area.

The Vice President Spoke at the Inter-denominational church service for the 2018 Armed Forces Remembrance Day Celebration, held at the National Christian Center, Abuja.