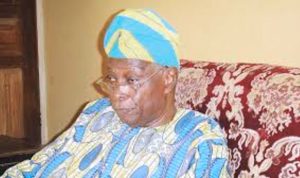 Suspected Fulani herdsmen, yesterday, stormed the farm of former Secretary to the Government of the Federation, SGF, Chief Olu Falae, located at Ilado near Akure, the Ondo State capital, setting it on fire.

He said the herdsmen destroyed five hectares of oil palm plantation worth millions of Naira.

Recall that Falae’s farm had, before now, been invaded by the Fulani herdsmen destroying crops worth millions of Naira as the invaders grazed their cattle.

Reacting to the destruction, the pan-Yoruba socio-political organisation, Afenifere said the Yoruba nation will not take the onslaught lightly.

Narrating his ordeal, Falae described the action of the herdsmen as deliberate and wicked.

The former Minister of Finance, however, appealed to President Muhammadu Buhari to call the herdsmen to order, just as the Commissioner of Police in the state, Olugbenga Adeyanju visited the farm to assess the extent of destruction.

He said the damage was much and that the fire was still raging at press time.

Falae lamented that “The Fulani herdsmen have again burnt my farm. They do that every year. As I speak to you, the Akure Police Area commander, my Personal Assistant and farm manager have visited the place. The state governor, Oluwarotimi Akeredolu has called me to confirm the incident and has also promised to visit the farm tomorrow.”

It was gathered that the herdsmen numbering about 10 stormed the farmland and set it on fire.

It was also gathered that policemen stationed at the farmland following incessant attack on the farm raised the alarm.

The herdsmen reportedly arrived the farm at about 5:30pm, yesterday, when workers were away for the weekend.

After wreaking the havoc, the herdsmen reportedly fled the scene.

According to him, “we are still trying to put out the fire.”

He said: “The security operatives stationed at the farm noticed the fire around 5:30pm and rushed to the scene of the incident only to find some Fulani herdsmen running away from the scene.

All the maize and cassava have been destroyed while the oil palm plantation was seriously affected.”

Raji said the farm which is over 10 hectares was destroyed by the herdsmen for no reason.

He estimated the farm produce destroyed at the farm to run into millions of Naira, saying apart from the oil palm plantation, the cassava and yam farms were also affected.