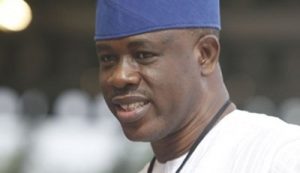 Detained former Minister of State for Defence, Senator Musiliu Obanikoro, on Wednesday stunned the Economic and Financial Crimes Commission with a fresh revelation that he gave former Osun State Deputy Governor, Senator Iyiola Omisore, the sum of N1.7 billion out of the N4.7 billion he got from embattled former National Security Adviser, retired Colonel Sambo Dasuki.
The former Nigerian Ambassador to Ghana, it was learned, made the revelation after spending the second night in EFCC custody in Abuja since he arrived from his base in the United States of America on Monday to sort out issues with the commission.
The EFCC had earlier raided Obanikoro’s Lagos home and carted away vital documents relating to the said fund transfer.
A top source in EFCC told Vanguard that Obanikoro did not, however, say what the money he allegedly gave Omisore was meant for and why he was the courier.
The source said: “The former minister, Obanikoro, has been cooperating very well with our operatives by giving detailed information regarding the N4.7 billion traced to him and companies linked to his sons.
“Obanikoro has confirmed that he actually transferred the sum of N1.7 billion from the NSA’s Office to Senator Iyiola Omisore but did not say why he did so and what the money was meant for.
“Obanikoro said out of N4.685 billon transferred to Sylva McNamara Limited, the sum of N3.880 billion was transferred to both Ayodele Fayose and Senator Omisore through cash and bank transfers.”
The official further quoted Obanikoro as having said: “The dollar contents were handed over to Fayose personally by me in the presence of some party leaders and he collected it and took it to the room next to where we were all seated.
“The location where I gave the dollars to him is called Spotless Hotel, Ado-Ekiti.
“One of the party leaders that was present was Dr. Tope Aluko, who was then the Secretary of our party, the Peoples Democratic Party.
“I transferred N1.7 billion to Omisore.
“The money was paid into his account and companies nominated by him.”
An EFCC top official said the agency would go all out to get those named as having benefited from the arms cash.
The source said: “The former minister confessed that he never had any business dealings with Omisore and did not execute any contract for him to warrant the transfer of the huge sum of money from the ONSA to companies nominated by him.
“Omisore himself is under investigation and we will have a day for himself.
“Obanikoro was very clear in the way the transaction was carried out.
“He did not mince words at all.
“When we get to the bridge we will cross.”
It will be recalled that the EFCC had in July this year arrested and detained Omisore after many failed bids to get at him to answer questions relating to the cash transfer.
According to EFCC, N1.7 billion was traced to Omisore and three firms out of the N4.7 billion allegedly laundered by Obanikoro.
On Tuesday, Obanikoro implicated Governor Ayodele Fayose, whom he said got more than $5.37 million for his election.
He told interrogators that he handed Fayose $5,377,000 in cash and N1.3 billion was received by the governor’s associate, Abiodun Agbele.
Obanikoro admitted that the N1.3 billion was flown to Akure airport in two chartered flights for delivery to Agbele.
The money was sourced from the $2.1 billion meant for arms purchase at the ONSA.
According to a report by the EFCC, the funds were transferred to various companies as follows: Fimex Gilt Limited (N160m)-8/8/2014 in UBA; Metropolitan Consortium (N350m)- 9/7/14 in First Bank; Sawanara (N300m)—1/8/14 in First Bank and Metropolitan Consortium (N350m)-1/8/14 in First Bank.
A top EFCC source said: “Preliminary findings have shown that N1.310 billion out of the N4.745 billion from ONSA was remitted to the three firms and the accounts of these three companies belong to Omisore.
“This is one of the reasons we invited him for interrogation.”
Before Omisore was finally arrested in July, the commission had through a letter of April 7, 2016 invited him for interrogation but he shunned them.
The letter, signed by Abubakar Madaki on behalf of the Acting Chairman of EFCC, reads in part: “The commission is investigating an alleged case in which your name featured prominently.
“In view of the above, you are kindly requested to attend an interview with the undersigned on Monday, 11th of April 2016 at No.30, Harper Crescent, Wuse Zone 7 at10am.
“Your cooperation in this regard is solicited.”
Instead of honouring the invitation, Omisore wrote a letter through one of his lawyers, Wole Jimi-Bada and Co, that the interview should be rescheduled to April 14, 2016.
The counsel said in part: “Your letter dated 7th April 2016 and addressed to our client and delivered to his gateman at our client’s residence has been passed on to our chambers.
“We regret to inform you that our client travelled briefly out of Abuja but will return by Wednesday evening. Consequently and unfortunately, he will not be able to attend the interview scheduled for Monday, 11th April 2016 as requested in your letter under reference.”
. Vanguard.

@@dailyrecordng
Previous We have not shut down Access Bank branch – Ekiti
Next Breaking News: Buhari sends 46 nominees for non-career ambassadors to Senate