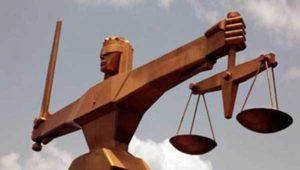 A Justice Daniel Osiagor-led Federal High Court in Umuahia, the Abia State capital, has sacked Ikechukwu Martins Apugo, as the All Progressives Congress (APC) candidate for Ikwuano/Umuahia Federal Constituency in the just-concluded 2019 National Assembly election in the state.

Justice Osiagor ruled in favour of a pre-election suit filed by former Speaker of the State House of Assembly and one of the APC aspirants in the 2018 primary election, Rt. Hon. Stanley Ohazuruka, challenging the eligibility of Apugo.

Reading his judgment, Justice Osiagor said, “APC law says that it is only the Collation Officer that can announce the results of the primary election. That the announcement must be made in Abuja, after collating the results. The collation officer testified as The Plaintiff’s Witness as (PW1), telling the court that any other documents that any person brings or will bring to the court as per the results is fake.

“After testifying, the plaintiff’s witness could not tender any original result sheets signed by him and the APC National Chairman as result for Ohazuruka. That after collation of the results, the secretary of APC collated and announced the result here in Umuahia. It contradicted the evidence act and APC law. INEC could not prove that Apugo won the primary election.

“The law deemed it very fit and necessary that primary election does not correspond with the electoral act 2010 as amended. On this ground, the primary election is hereby annulled. The party (APC) should conduct fresh primary election in Umuahia South constituency, so that, substantive candidate will emerge.”

Reacting in an interview with newsmen shortly after the judgment on Tuesday at the court premises, Apugo faulted the position of the Justice Osiagor-led tribunal, cancelling the primaries.

Apugo said, “The judge did it just to say he gave judgment. So, we are still where we are. And again, I heard that he said, he is nullifying the primaries. How can he deliver judgment? Nobody ask him to nullify primary election.

“The people that brought the matter to the court did not ask for nullification; including me. What we want is either declare this person winner or the other person winner of the primaries. And you did not declare anybody the winner; he (judge) said he annulled primary election. So, what does it mean? That means it is neither here and there.”

Recall that Ohajuruka had dragged Apugo to court over the outcome of the primary election.

Ohajuruka had asked the court to declare him the winner of the October 5 2018 primaries of the APC following the excessive rigging that marred the exercise.