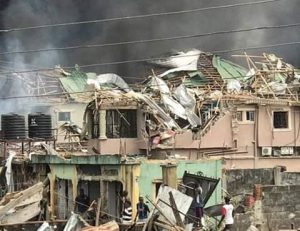 Lagos State Governor, Mr Babajide Sanwo-Olu has arrived the scene of Sunday’s explosion in Abule Ado area of Festac which claimed lives and property worth billions of naira.

Earlier, the Deputy Governor, Dr Kadri Obafemi Hamzat and members of the State Executive Council also arrived the scene to carry out on-the-spot assessment of the tragic incident.

The Governor commiserated with the victims, and ordered the Lagos State Environmental Protection Agency (LASEPA) to immediately release safety materials to residents of the area.

The Governor also announced that the State Government has set up a N2bn Relief Fund to assist the victims, while a fact-finding Committee headed by the Deputy Governor has equally been set up to probe the incident.

The Committee is to submit its report in two weeks.

According to Sanwo-Olu, “We are working with NEMA, NNPC and other agencies to make life easier for everyone affected in the tragic incident at Abule Ado which claimed lives and caused extensive property damage. I offer my condolences to everyone affected.

“I have instructed the Lagos State Environmental Protection Agency to immediately release personal safety materials to the people living around the area especially to first responders and all safety workers at ground zero. We will continue to monitor the situation.”