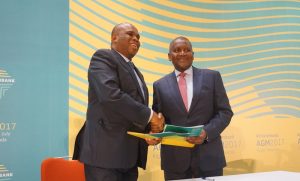 The African Export Import (AFREXIM) Bank has signed a $1billion memorandum of understanding (MoU) with the Dangote Group of Companies at the 24th Annual General Meeting of the bank holding in Kigali, Rwanda.

AFREXIM Bank’s president, Dr. Paul Oramah, said “the deal was part of the bank’s bid to expand businesses in Africa through disbursement of N9 trillion ($25) billion in the next five years.”

He said, “the bank, had set for itself target of strengthening businesses in various sectors of the economy within the region to bring a major change in the prevailing situation whereby once there was crash in commodity prices, it would send economies of most countries into recession.

He said the regional bank, which was currently focusing its core strategy on promoting intra-African trade, promoting industrialisation and export of manufactured goods as well as maintaining trade financing leadership in Africa, was already making its business supportive and promotion impact in many countries within the continent.

The AFREXIM Bank boss, commended the president of Dangote Group, Alhaji Aliko Dangote for his business efforts describing him as pride of Africa.

Listing Dangote group among the African business Champions, the continent could boast of Oromah, stated, “A number of African champions have emerged creating manufacturing capacities and fostering the emergence of regional and continental supply chains. For instance:

“The Dangote Group has cement plants in about 14 African countries and is now the largest supplier of cement in Africa. The Group will by 2018 open one of the largest refineries in the world. The refinery, with capacity of about 650,000 bpd, can supply the total refining requirements of West Africa.”

Speaking, Dangote thanked the bank for the loan saying it would be judiciously utilised in expansion of the group’s investment. He said the group had investments in 14 African countries adding that its main business in those countries was cement.

He said in its effort to expand its business frontiers, the group had to contend with competition, some of which comes from top government officials of the host countries and that the group had relied on legal appeals to surmount such problem.

The group, according to him, surmounts problem of high production cost in most of the African countries by generating its own power directly from the national grid.

He said even in the midst of the resistance, the group, paid its taxes to these countries and creates employment for their citizens.

He encouraged young investors in the country to believe in their abilities, adding that this was the beginning of their success.