Akeredolu To APC: Aggrieved Members Can Seek Redress In Court 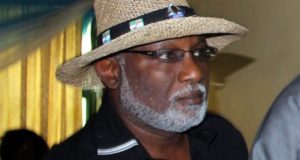 The Ondo State Governor, Oluwarotimi Akeredolu (SAN), has said it is the right of aggrieved members of the All Progressives Congress to seek redress in court over any matter they are not satisfied with.
Akeredolu, who spoke on Sunday, said the position of the National Working Committee of the party that aggrieved members must not go to court was “totally flawed”.
The National Chairman of the APC, Adams Oshiomhole, had stated the position of the party barring aggrieved members from going to court.
But President Muhammadu Buhari faulted the position of the party, saying it is the right of aggrieved persons to seek judicial intervention.
Backing the President’s position on Sunday, Akeredolu said: “Let me state without any doubt that I stand on a good wicket in arguing that the position of the President, an acknowledge veteran in court disputation, cannot be faulted.
“The argument of the NWC members is totally flawed.
“The provision of our party constitution referred to severally and relied upon to support their claim can only be used in law as a SHIELD and not a SWORD.
“Using the provision as a SHIELD will include approaching the court to decline jurisdiction to hear any of the cases if domestic fora for settlement in accordance with the party constitution was not exhausted before commencement of the suit.
“The court will look into the circumstances of each case to reach a conclusion any which way.
“In most cases the court will be obligated to inquire into whether or not there was opportunity for exploring the domestic fora for settlement in accordance with the Party constitution.”
Akeredolu said the NWC’s position is an invitation to infringe on the constitutional rights of members, adding that there is no provision of the party’s constitution that prohibits members to seek redress in court.
He added: “What our NWC members are canvassing against the President’s position is anarchy; an invitation to infringe on the constitutional rights of our members in a democracy by using the provision of the Party constitution in issue as a SWORD.
“This will certainly not stand the test of time.
“To the best of my knowledge there is certainly no provision in our Party constitution that prohibits our members from approaching the court if they feel aggrieved on any matter. If any such provision exists it will be UNCONSTITUTIONAL.”
Akeredolu advised the NWC to seek proper legal advice before taking decisions that are likely to cause more confusion in the party.
He said: “NWC may wish to seek proper legal advice on this before taking actions that would further muddle the waters.”

@@dailyrecordng
Previous Finally, Buhari addresses rumours of being cloned in Poland
Next Over N11t Stolen Under Buhari’s Watch – PDP