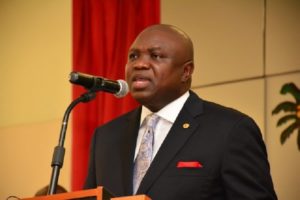 When a man is pushed to the wall, there is only one direction he can turn.

This is the situation of the erstwhile governor of Lagos State, Akinwunmi Ambode.

Said to have severally ignored the invitation of the Lagos State House of Assembly (LAHA), to answer to financial infractions that took place while he was governor, some maintain that the man is being hounded like a rabid dog.

Some insist that members of LAHA have been going about affairs concerning Ambode’s too personal.

However, there is a limit to what a man can take, and this is what has seen Ambode fighting back, as he seeks redress in court.

Trained in the act of fighting dirty before the All Progressive Congress (APC), Primary Election that saw him losing out on his second term bid, Ambode appears to be set to bring the experience to bear, as he begins a fight against his common enemies.

On Tuesday, October 29, he announced that he was ready to fight back when he got a court order summoning the Speaker of LAHA, Mudashiru Obasa, and halting the ongoing investigation for which he had been indicted for.