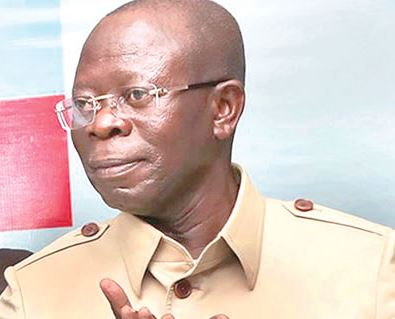 AS the leadership crisis rocking the All Progressives Congress (APC) festers ahead of Tuesday’s controversial National Executive Committee (NEC) meeting called by anti-Oshiomhole forces, there are strong indications that cracks are beginning to develop in their rank.

The bone of contention is: who replaces Mr. Adams Oshiomhole as national chairman of the party.

The Chairman of the APC Reconciliation Committee, Chief Adebisi Akande, yesterday expressed worries over the rate at which party members are resorting to litigation to resolve issues that could be handled internally.

The Nation learnt that a meeting of APC governors opposed to Oshiomhole held in Abuja on Friday discussed and frowned at the resolution of an earlier meeting of some Southsouth APC leaders backing the current acting national Secretary of the party, Victor Giadom, from Rivers State to take over from Oshiomhole either in acting capacity or substantive role.

Four ministers from the Southsouth attended the meeting which was convened by Governor Godwin Obaseki of Edo State.

Participants at the meeting wanted Oshiomhole sacked as early as possible and his position taken over by someone from the same region.

Reading a memo at the meeting, Governor Obaseki reportedly said: “as a party we commend our brother, the acting chairman of the APC Victor Giadom, for rising to the occasion by providing leadership for the party in these trying times.

“We fully support the convening of the National Executive Committee (NEC) meeting on Tuesday, March 17th, as the NEC is the only recognized organ under the constitution of our party to resolve these crises.”

Obaseki, reading from the communique issued at the end of the meeting said the APC “should respect the present zoning arrangement by retaining the chairmanship of the party in the Southsouth zone, even in acting capacity.

“It further resolved that the most senior party officer from the zone being the Acting National Secretary, Chief Victor Giadom, should be confirmed Acting National Chairman of the party at the Tuesday emergency NEC meeting.”

However, sources told  The Nation that some other  anti-Oshiomhole APC governors, including Abubakar Bagudu of Kebbi State, Ibrahim Badaru of Jigawa State and Nasir El-Rufai of Kaduna state were  displeased with Obaseki’s role in the suggestion of Giadom as a possible replacement for Oshiomhole.

Some National Assembly members were said to have accused the Edo governor of abandoning earlier discussions and plans outlined by his fellow governors and adopting  a new plot allegedly hatched by Transportation Minister, Rotimi Amaechi.

A source said: “Governors and others at the meeting held to discuss plans for Tuesday’s NEC meeting were displeased with reports that Governor Obaseki joined others to name Giadom as a possible replacement for Oshiomhole in event of his sack.

“The move by Amaechi and others last Thursday is strange and an affront on the bigger anti-Oshiomhole group being championed by many serving governors led by the chairman of Progressive Governors Forum, Abubakar Bagudu of Kebbi State. It is being viewed as an attempt to hijack the whole process and this is capable of causing disaffection.”

The Nation gathered that the camp of those who want Oshiomhole out is yet to agree on who should replace him.

While some of the governors are still backing a former governor of Cross River State, Clement Ebri, the majority of the federal legislators supporting the sack of Oshiomhole are considering former Senate leader, Senator Victor Ndoma-Egba, as his replacement. Ebri stepped down for Oshiomhole at the last convention. Governor El-Rufai is reportedly one of those rooting for him.

Another source said Bagudu, Badaru and a couple of other governors have zeroed in on the former governor of Zamfara State, Alhaji Abdulaziz Yari, as Oshiomhole’s replacement.

The Nation learnt that those rooting  for Yari are largely made up of northern party chieftains ready to support the emergence of a southerner as the 2023 presidential candidate of the party.

A source said: “Their argument is that, to make it easy for the south to pick the presidential ticket in 2023, a northerner should be made chairman in the spirit of the zoning formula.

“Most anti- Oshiomhole southern APC governors, including Obaseki, until now are in support of this idea. This is why many are now blaming Amaechi for the endorsement of Giadom by chieftains present at the meeting called by Obaseki in Abuja.

“Governor Fayemi and those with him share this view too. It is therefore strange that some southerners will meet and try to stage an upset by naming Giadom to replace Oshiomhole.”

Chief Akande, reviewing the situation in the party yesterday warned against the indiscriminate resort to litigation by some party members. Akande in a statement said such was not in the best interest of the party.

His words: “the fact that all party members do not agree on all things is not abnormal. Politics after all is, in significant degree, the art of resolving conflicts and disputes in a manner that strengthens institutions as well as relationships between the people who share those common institutions.

“The APC is a democratic body. This means we seek to resolve internal conflict through dialogue, deliberation and ultimately through open and transparent voting procedures. Consequently, I am a bit taken aback by the swift resort to the courts by some members who seek external decisions on what are intrinsically internal matters best determined by the deliberative process that is part and parcel of democratically-oriented party politics.

“I do not know the motivations behind this litigious conduct.  It is not in my nature to ascribe negative or harmful motives to anyone. Those seeking access to the courts to decide what are basically political questions, perhaps think they are doing the right thing. If this is the case, I must state that they are innocently in error.

“Their actions are harmful to the party in compound ways. First, the subject matter they bring before the court is not amenable to judicial pronouncement.

“The manner by which court decisions are rendered – one side wins, the other loses – is not the best way to resolve political disputes. Again, such disputes are better treated by dialogue and the give-and-take that dialogue engenders.

“Courts do not proceed in such a manner. Second, to resort to the courts casts the party in a negative public light. Third, this penchant for litigation undermines party discipline, internal dispute resolution mechanisms and institutions.

“I must remind party members the party constitution requires that all internal dispute resolution measures be exhausted before a member carries a matter to court. I dare say this provision has not been honoured either in spirit or in letter by those initiating these court cases seeking to oust party officials.

“More specifically, along with several other respected party members, I have been appointed as a member of the party’s special reconciliation committee. I have been given the further honour to be the committee chairman.  This committee was the product of discussion and deliberation of party organs such as the NWC and NEC. No one has contended that this committee was improperly established.

“The committee mandate was to investigate and submit recommendations regarding the dispute in Edo state involving National Party Chairman Oshiomole and Governor Obaseki as well as inquire into disputes in other states that might weaken the party. All party members are aware of this decision.

“Thus, it runs contrary to the explicit decision of the party and is severely premature for members to seek judicial intervention in areas that form the very subject matter of the special committee’s mandate. To do this even before the committee has had time to do and finish its work not only insults the committee, it offends the NWC, NEC and the entire party.

“Consequently, I call on all party members to honour the rightful and correct decisions of the party leadership. Members should allow the committee to do its work and should stop seeking judicial intervention in matters under the purview of the special committee until the committee has done its work and the party leadership has acted upon its recommendations. For members to act otherwise would be to discard the party constitution and ignore the tenets of deliberation and compromise upon which all successful political parties are founded.”