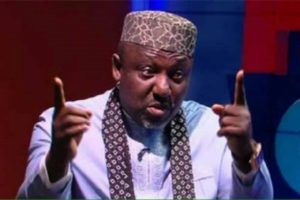 The Governor of Imo State, Rochas Okorocha has said the National Chairman of the All Progressives Congress, APC, Adams Oshiomhole needs to learn how to talk in a way that will dignify the party.
Okorocha said this while lambasting the APC Chairman over his comments against some leaders of the ruling party.

Recall that Oshiomhole had on Wednesday described some state governors on the party’s platform as poor students of history.
Oshiomhole had spoken after receiving the APC women leaders from Edo State and Abuja, who paid him a solidarity visit in his office in Aso Drive, Abuja.

In a swift response, Okorocha said the former Edo State Governor should apply caution in the way he speaks about the party leaders.

In a statement by his Chief Press Secretary, Sam Onwuemeodo, the governor urged Oshiomhole to learn from President Muhammadu Buhari.
He said, “We have not read Oshiomhole’s statement but I don’t think any National Chairman of a party can say such a thing. He should be advised on how he speaks. He can’t be attacking the leaders of the party.

“Take it from me, a party does not exist in a vacuum. There must be people to run the party. President Muhammadu Buhari has a high pedigree which Nigerians are happy of and Oshiomhole should learn from Mr. President.

“We have not read it anywhere but we insist that it is not the best way to treat members of the party. Oshiomhole should learn to talk in a way that brings dignity to APC”.