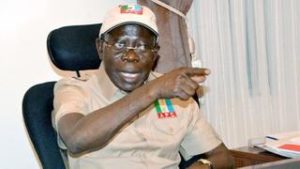 Cyril Ogodo, a factional chairman of the All Progressives Congress (APC) in Delta State, has made good his threat to file contempt proceedings charge against the National Chairman of the party, Adams Oshiomhole.
The former Edo governor is accused of allegedly submitting a list of candidates from the state despite a court order.

The faction filed Form 48 Notice of Consequence of Disobedience of order of court before the Federal High Court in Abuja against Oshiomhole, the chairman of the Independent National Electoral Commission (INEC), Prof Mahmood Yakubu and factional APC chairman, Jones Erue.
The action, which was filed by Mike Ozekhome (SAN), followed Oshiomhole’s alleged disobedience of an order for status quo by Justice T. B. Adegoke of the Asaba Division of the Federal High Court on October 17.

Ozekhome argued that the Supreme Court decisions in a number of cases including Labour Party v Independent National Electoral Commission (2009) and Gwarzo V Mohammed & Anor (2012), stresses the need to obey the order of court.
Meanwhile, no date has been fixed for hearing.

The faction had in a statement signed by Fred Olokor Esq., said mischievous interpretation was being given to an order made on the 17th of October, 2018 by Honourable Justice Toyin Adegoke of the Federal High Court, sitting in Asaba in the suit brought by Cyril Ogodo & 2 ors Vs. Adams Oshiomhole, APC & Ors that all parties maintain status quo pending the hearing and determination of the substantive suit.

It read: “At the resumed hearing of the case, Counsel to the Plaintiffs (O. J. Oghenejakpor, Esq.) who had filed a Motion on Notice to restrain 1st and 2nd Defendants (i.e APC and Oshiomhole) from submitting any list of candidates from Delta State to INEC other than the list of candidates that emerged from the Cyril Ogodo led executive’s primaries, which was duly served on all the Defendants, urged the Court to hear the motion on notice. But because the Defendants served counsel to the Plaintiffs their processes which included preliminary objections in court on the 17th of October, 2018 the motion was not moved.

“In a bid to diligently prosecute the case, the plaintiffs’ counsel applied for a stand down for a few hours to respond to the preliminary objections filed by the Defendants and served in court. The stand down was granted.

“And before the resumption of hearing after the stand down, the Plaintiffs’ counsel was able to file his response to the preliminary objections and was ready to argue the said preliminary objections and the substantive application. However, because the Defendants main aim in court was to stall the hearing of the case, they vehemently argued that they were not ready to respond on points of law orally. They insisted on filing a reply and applied for an adjournment of the case.

“When it was clear that the Defendants counsel’s intention was to stall the hearing of the case, the Plaintiff Counsel called upon the court to preserve the res in the matter which is to restrain the APC from submitting any list of candidates from Delta State to INEC for the 2019 general elections except candidates that emerged from the Cyril Ogodo anchored primaries.

“At this point the Honourable Judge ordered that all parties should maintain status quo. The clear meaning and intent of the status quo, therefore, is to preserve the res by ensuring that no list of candidates is submitted to INEC until the determination of the substantive matter.

“This was why the judge ordered for accelerated hearing and fixed November 1st and 2nd 2018 for the hearing and determination of the case.

“It is therefore pedestrian and mischievous for anyone to suggest or argue that the Federal High Court in Asaba did not restrain APC from submitting any list of candidates for Delta State to INEC.”