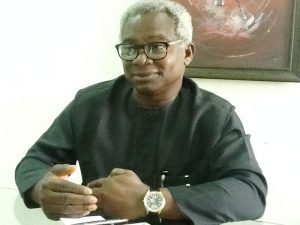 The Director-General of Voice of Nigeria, Mr. Osita Okechukwu, on Sunday gave further knocks to the party’s national chairman, Comrade Adams Oshiomhole over his alleged manipulation of the primary elections conducted in Enugu state.
Okechukwu, a chieftain of the party, contested for the Enugu West senatorial district ticket of the party.

The VON DG in a letter to the Kano State Governor, Abdulahi Umar Ganduje-led peace and reconciliation committee, said Oshiomhole scuttled the process.
DAILY POST reports that other aggrieved aspirants in the state had also demanded a refund of the money they paid for nomination and expression of interest forms as a first step towards genuine search for peace.

Your Excellency, may I start by welcoming you and your eminent Reconciliation Committee and in the best tradition of our ancestors I welcome you wholeheartedly to Enugu State. It is because of the respect I have for our great party and President Muhammadu Buhari, GCFR, that am here.

Permit me to state that it is a pity that it seems that Comrade Adams Oshiomholein his narcissistic ploy to consolidate his mangled All Progressives Congress (APC)’s primary elections; that he belately convoked your eminent Committee, so as to foreclose the most remedial antidote for us rigged aspirants – the Substitution Window. Hence bolting the door after the horse had escaped, since the Substitution Window of the National Assembly, Governorship and House of Assembly to the best of my knowledge had closed.

When Comrade Oshiomhole traveled abroad some of us pointed out that he deliberately traveled so as not to utilize the Substitution Window provided by the Electoral Act and extant laws to redress rigged primary. Am not happy to be vindicated, for at the end of the day as an elder of our great party; I pray that your committee should not end up achieving only peace of the grave yard, for some aggrieved aspirants might quietly go home sulking.

Your Excellency, Comrade Oshiohmole’s Rigging No 1, of the primaries started the day he overruled the National Working Committee (NWC) and by extension himself. The NWC had written letters to all the 37 Chapters of our great party, demanding which option – direct, indirect or consensus to be adopted.

Accordingly, Enugu State adopted Indirect Primary and it was advertised in major newspapers along with other states. Midway, after conducting the election of 4 local government areas out of 17 at the University of Nigeria Enugu Campus, he stopped it for no just reason. The next day, as an autocrat he changed it to Direct primary, with neither ballot papers nor ballot boxes; a very illegal and undemocratic atrocity.

With due respect, Mr Chairman, one submits the petition one submitted to the Appeal Panel Committee at the National Secretariat of our great party; where I narrated how one Mrs Juliet Ibekaku Nwagwu, a divisive character and use and dump persona, who used thugs to chase our members away from the May 6, 2018 State Congress at Enugu Sports Stadium, thugs that nearly killed the driver of the State Chairman, was allocated votes she didn’t earn. A lady who has kept a fringe vile faction alive, which nearly destroyed our great party, alienated our Hon Minister, His Excellency Geofrey Onyeama and other leaders from the party stakeholders. It is on record that she filed serial court cases against Dr Ben Nwoye State Executive, some of which are still subsisting. Juliet according to one elder has balkanized our party, by her tendency for One Week, One Problem.

May I appeal to Your Excellency’s Committee to use your good offices to help us unravel the mystery surrounding the allocation of unearned votes to Juliet, in an election which I won. This is to avoid future occurrence of this grand betrayal in the name of rigging as she maybe electorally hurt by this misadventure – Rigging No 2.

Your Excellency, on submission the clerk at the National Secretariat refused to acknowledge my petition and I told the clerk that I started my working career in 1976, as a messenger and that one of the induction courses was the imperative to acknowledge mails and record incoming and outgoing.

On further inquiry, I reminded him that I was a member of the Merger Committee and a member of the Administrative Structure Panel which vetted his appointment, is this how to pay back my good works for the party, he confided in me that they were all instructed not to acknowledge but to collect petitions. Rigging No 3.

Rigging No 4. The only one Appeal Panel to the best of my knowledge never sat, as one was not invited even when I submitted one copy to the chairman, Professor O. Osunbor. Ironically the same Professor Osunbor was among the colony of Edo State contingent chairmen of over 9 States panels. He chaired Kebbi State, which is duplicity.
.
Your Excellency, I wish your committee the best of luck and pledge my unalloyed loyalty and support to our great party and President Muhammadu Buhari. This is why we of the Buhari Support Organisation formed the Zikist-Buharist-Movement (ZBM) to mobilise all and sundry irrespective of party affiliation to embark on all necessary and lawful duties to re-elect Mr President in the February 2019 presidential election for the good of our dear country.