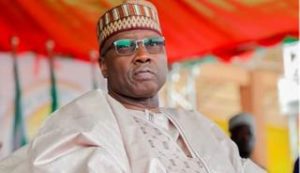 The Secretary to the Government of the Federation, Boss Mustapha, says he believes the All Progressives Congress has won the 2019 elections.

According to him, the APC is only waiting for the Independent National Electoral Commission to announce the results.

Mustapha said this on Thursday during the Gombe State APC’s governorship campaign rally at the Olusegun Obasanjo Stadium in Kaltungo, Gombe.

The SGF said, “We are only waiting for the announcement of the results. Just make sure you come out with your PVCs (Permanent Voter Cards) and cast your votes because the Peoples Democratic Party cannot deceive again.

“Today, the lies of PDP have finished because we are here in Kaltungo to uproot the roots of the PDP.

“In 2015, the PDP deceived you that our party, the APC was a Boko Haram party, they told you that if you voted for the APC, all of you would be islamised, there was nothing they didn’t tell you.

“Today, if Buhari plays politics of religion, he wouldn’t have appointed me the SGF because I am a Christian. If he were to be a religious politician, he wouldn’t have taken (Yemi) Osinbajo, a pastor, and made him the Vice-President.”

He listed some of the Christians appointed by Buhari to key positions in his administration as former Minister of Finance, Kemi Adeosun, and the CBN Governor, Godwin Emefiele.

Mustapha said, “You people of Gombe South, come out and vote for the APC from the top down to the bottom.”

A former governor of the state, Senator Danjuma Goje, said Christians in the North did not enjoy key national appointments until the coming of President Muhammadu Buhari.

He said, “Although (Yakubu) Dogara has left the APC, he benefited from the party. He became the Speaker of the House of Representatives.”

On his part, Osinbajo said the APC was a party for everybody.

“I hope you know that I am not only a Christian, I am a pastor and I have worked very well and happily with our President because he is a reliable and trustworthy person, honest and straightforward.

“You have seen the SGF, he has also been working with the President. Every one of us must know that the APC is for every one of us.”

Meanwhile, the Senator representing Gombe South Senatorial District, Joshua Lidani, defected from the PDP to the APC along with some leaders of the party in the state.

Lidani, who spoke on behalf of others, said, “We have seen our mistakes because they lied to us and we have now joined the APC because we know that they will meet our needs.”