APC to Atiku: Nigerians will never return to Egypt 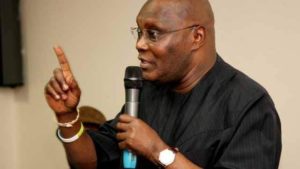 The All Progressives Congress ( APC ) on Thursday declared Nigerians will never return to the era of looting of national resources and wealth.

In its reaction to Wednesday night’s televised town hall meeting, The Candidates, which featured the presidential candidate of the Peoples Democratic Party (PDP) Atiku Abubakar and his running mate Peter Obi the ruling party stated Nigerians know what is at stakes in the February 16 poll and will never return to Egypt.

The party said: “It is disturbing that Atiku and his returning mate, Peter Obi, could boldly face the national, and indeed, global audience boasting the future of our country belongs to the looters.

“As a matter of fact, Alhaji Atiku repeatedly told a bewildered nation that those who caused poverty, unemployment, poor infrastructure and misery for many Nigerians under his watch as the vice president would be left to enjoy our commonwealth as long as they turned in part of what they have stolen. This no doubt must have gladdened the hearts of all the enemies of our country.”

The APC added: “In a barefaced manner, the PDP’s Presidential candidate, Alhaji Atiku promised to roll out the red carpet for people who have wickedly teamed up with him under PDP to ruin our country, in an environment such as ours, where many ordinary Nigerians, not being Atiku’s friends, are wallowing in prison for stealing their neighbours’ goats, phones, foods and such.

“While Atiku tries to crowd the public space with falsehood on the ongoing fight against corruption and efforts to ensure credible 2019 general elections, the real issue remains Atiku’s inexplicable desperation to selloff remaining national economic assets to his friends and shadowy foreign concerns as Atiku did in the past and has severally and brazenly promised in his campaigns.

‘’Atiku’s bid to trade national assets as an incentive for the support of his friends and foreign investors must be resisted.

‘’For the All Progressives Congress, we would not get tired of reminding the PDP and Atiku that Nigerians will never return to Egypt.

“The era of unbridled corruption and impunity is one mission the President Muhammadu Buhari-led government is determined to FIGHT and WIN under a free, fair, and credible electoral process, with the support of well-meaning Nigerians.”

@@dailyrecordng
Previous N322m Fraud: Nwoboshi Urges Court To Stop Bank’s Official From Testifying Against Him
Next How Leo won a million hearts in 12 months…More than one million Africans now bank on Leo