APC’s injustice will not stand in Ogun, says Akinlade 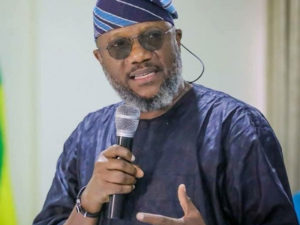 The governorship candidate of the Allied Peoples Movement in Ogun State, Adekunle Akinlade  has expressed confidence that he will emerge victorious in the March 2 governorship election  in the state.

He said the injustice allegedly perpetrated by the National Chairman of the All Progressives Congress ,Adams Oshiomole, would not stand.

The APM candidate called for voters  to  help  him  win the election to  prove to the ruling party that he was  the people’s  top choice to succeed Governor Ibikunle Amosun.

Akinlade,  Amosun’s preferred candidate to contest the post under the banner of the APC, dumped the ruling party for the APM  after the party settled for Dapo Abiodun  to realise his ambition to rule the state.

He said  during his ward-to-ward campaign ahead of  the  election on Friday the people of the state were  ready to reclaim the mandate “stolen from him” while in the APC.

He blamed the APC National Chairman Adams Oshiomhole for the party’s decision to deny him of the ticket.

He said,  “I think what I have seen is the genuine consciousness, a revolution I must say. And that the people of Ogun State have come to the realisation that the injustice that was perpetrated on October 2, 2018 must not stand.

“We will not allow the injustice to stand in Ogun, my people want me  that is why you can see a lot of supporters here.”