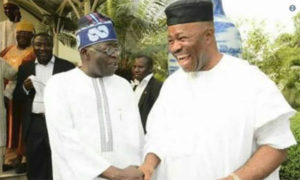 FORMER Senate minority leader, Obong Godswill Akpbio, has given a glimpse of the shape Nigeria’s 2019  general elections would take, equating the coming general elections to the 1940 invasion of Poland by Adolf Hitler’s Germany. Akpabio who recently defected from the Peoples Democratic Party, PDP, to the All Progressives Congress, APC, said the election shall be war which its victory shall be in his side and to that of his new found political party.

Conducting what he said was his first official function since he formerly defected to the APC in a rally at Ikot-Ekpene, Akwa Ibom State, Akpabio said he chose an uncommon method for his defection because he was an uncommon transformer.

Akpabio said: “Recently, I had an occasion in Akwa Ibom State and this is what happened: I went just to make a floor declaration; others do it in the social media, others just sit in their offices, some do it by text messages that they have changed platform,   what we call party. But in my own, I just decided to do it in an uncommon way because they call me uncommon transformer.

It was watched in 59 countries and somebody asked what happened there, and I said just how it happened in Poland. When they asked Hitler’s minister for information how was the war in Poland? He said Warsaw saw war and war saw Warsaw. “I will say that in the Ikot-Ekpene arena, when I stepped out, this is my first function after that, Warsaw saw war and war saw Warsaw.

We don’t want to be very reach because when you are very rich and you want to die, you start crying because of your money in the bank. “All of us have resolved that God should just give us the basic need like Mama was. We just want to be comfortable the way we are and now she is transiting to haven and she will be there as a saint to pray for the rest of the world, may God accept her in Jesus name. Amen!”