APGA has over 10,000 registered members in A-Ibom —Chairman 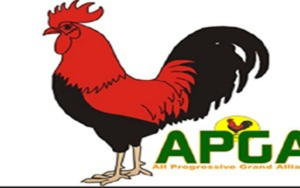 All Progressive Grand Alliance, APGA, in Akwa Ibom State, has no fewer than 10, 000 registered members, the state Chairman of the party Mr. Joseph Otu, has disclosed.

The party chairman, who spoke yesterday in Uyo, noted that it had become necessary to correct the erroneous impression in some quarters that APGA was an Igbo party with ethnic agenda.

He said that the party would field candidates in most of the elective positions in the forthcoming elections particularly the governorship and senatorial positions. His words: “APGA is not an Igbo party.

It is a national party and it is prepared to field candidates in all elective positions and membership of the party as we speak cuts across the 329 wards of Akwa Ibom State.

“We already have over 10,000 registered members across the 329 wards in the state and we have commenced registration of new members.” Related

@@dailyrecordng
Previous 2019: Lamido may step down for me as brother —Atiku
Next Ekiti College of Health staff shut institution, declare indefinite strike