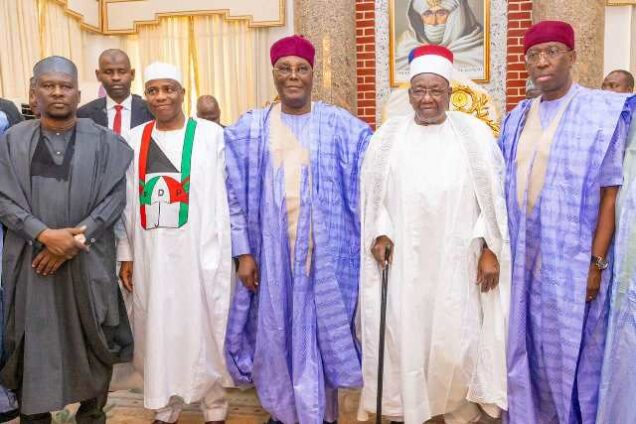 Atiku in Borno with Tambuwal and others

The presidential candidate of the Peoples Democratic Party, Alhaji Atiku Abubakar has reiterated his commitment to fight insecurity in Borno state and the entire country if voted into power in the 2023 polls.

He also promised to reduce taxation, and revamp the Lake Chad basin to support agricultural farm produce in Borno state.

Atiku stated these while speaking at the PDP presidential campaign rally in Maiduguri, Borno state.

The former Nigerian Vice President, who spoke majorly in Hausa told PDP supporters in Maiduguri that the Shehu of Borno, Alhaji Abubakar Umar Garba requested things which include oil exploration, security, water supply, agriculture and education which he told the monarch that of PDP gets elected in 2023, he would ensure the five requests are granted.

He said, “When we arrived Borno, we visited The Shehu of Borno who requested us five things and we have promised that if we get elected as President, we shall fulfill our promises.”

Atiku noted that “In the Shehu of Borno’s speech, he asked for three to four things and I, in my capacity as Zannah Santa of Borno, I’ve promised that if Nigerians elected me, I’ll do them in Borno by God’s grace. First, he said he wants us to revive the Chad Basin Authority. When I was working in Borno, it was working fully and provided employment opportunities. Secondly, he asked me to bring back the peaceful atmosphere in the state.”

“You can’t achieve anything without peace and I’m promising to restore peace because there’s no reason why there should be security issues in Borno at a time like this,” he noted

Earlier the woman leader of PDP urged Borno women to vote massively for Atiku in the 2023 presidential election.

She said, “ tell your husbands, brothers, sisters, friends and children to vote for Atiku in the election next year.”