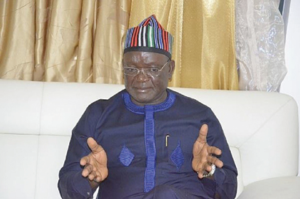 By Sam Eyoboka A GROUP,

Igede People of Benue State in Diaspora, has joined in the condemnation of Economic and Financial Crimes Commission, EFCC, for demanding the minutes of the State Security Council meetings between 2015 and 2018, describing the act as harassment and intimidation taken to the extreme.

According to Kaduna State branch chairman of the group, Mr. Sunday Oibe, the anti-graft agency, which has lately assumed the position of an attack dog of All Progressives Congress, APC, has not relented in persecuting the state governor, Mr. Samuel Ortom, since he defected from the ruling party to the PDP.

Reacting to reports of plans by EFCC to pry into the minutes of security meetings of the state, Oibe warned President Muhammadu Buhari’s administration that if anything happened to the state and its governor, he would be held responsible. He said: “The rule of law must be followed. By using harassment, I don’t think APC chairman, Mr. Adams Oshiomhole, is in order.

He said:  “It is not a must, Nigeria is not an entity for any person. Nigeria belongs to all of us. We,  Igede people in the diaspora, are calling on the entire Nigerians that if anything happens in Benue State, Mr. President will be held responsible because he is the one who is blocking the other side and allowing people in. “We are still insisting that the IGP who had been accused severally of paying deaf ears to corruption in APC, must be sacked the same way the erstwhile Director-General of the Department of State Services, DSS, Alhaji Lawal Daura, was sacked.

@@dailyrecordng
Previous APC’s takeover of Akwa-Ibom’ll be like Hitler’s invasion of Poland—Akpabio
Next Primate Ayodele’s 2018/2019 prophetic bombshells!: VP Osinbajo will be dumped; NURTW will be scrapped