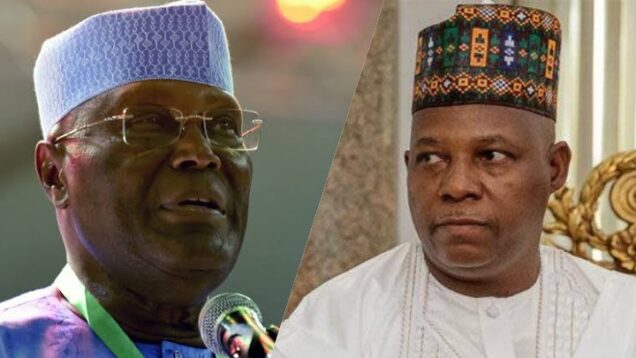 The presidential campaign organization of Atiku Abubakar said Nigerians can never trust the APC because Boko Haram terrorists became an intractable menace right under the watch of Kashim Shettima as Governor of Borno State.

The comment by Atiku’s campaign team was in response to a recent comment made by Shettima, who is the vice-presidential candidate of the All Progressives Congress (APC).

While speaking on Tuesday in Lagos, Shettima linked Atiku Abubakar, presidential candidate of the PDP, to Raila Odinga, former Kenyan prime minister, who has contested to be president multiple times but hasn’t succeeded.

The former governor of Borno also said Abubakar lacks the capacity to lead Nigeria because he has not been able to unite the PDP.

Reacting in a statement on Wednesday, the PDP campaign in a statement issued by Dele Momodu who is the director of strategic communication, said Shettima is pointing fingers “at the specks in another man’s eyes while studiously ignoring the giant logs in his own eyes”.

“We have watched in utter incredulity and amazement the boldfaced speech made yesterday by the APC Vice Presidential candidate, Alhaji Kashim Shettima, at an event in Lagos,” the statement reads.

“He alleged gleefully that the PDP Presidential candidate, H.E Atiku Abubakar (GCON) cannot unite Nigeria when ‘he has not united his own political party.

“It is our belief that Alhaji Shettima, in a moment of deliberate amnesia, must have tried to point fingers at the specks in another man’s eyes while studiously ignoring the giant logs in his own eyes.

“The APC is in total disarray with prominent members of his party openly apologizing to Nigerians for the unmitigated disaster it has foisted on Nigeria since 2015. This is one of the reasons APC members have been migrating in droves to PDP.

“It took almost forever for APC to achieve the simple task of constituting its Presidential Campaign Council, due to the total lack of unity in their party. It is very obvious that APC has become completely rudderless and many self-respecting members are jumping ship and being recovered by PDP.

“How can these APC candidates ever unite Nigerians when they’ve shown open disdain for the democratic and voting rights of certain ethnic groups within their domains?

“Everything about APC and its candidates has been shrouded in secrecy and they are just unable to tell Nigerians the truth about anything. How can Nigerians be expected to place their faith in such mysterious characters?

“Alhaji Shettima alleged that Atiku Abubakar cannot be trusted with the economy of Nigeria. No heresy could be worse than this. Nigerians would want to know what businesses the APC candidates have managed personally and successfully except living outlandishly on government booty and largesse.

“How can APC be expected to guarantee the safety of lives and properties when right under the watch of Alhaji Shettima as Governor of Borno State, Boko Haram became an intractable menace and Nigeria is yet to fully recover till this day?”