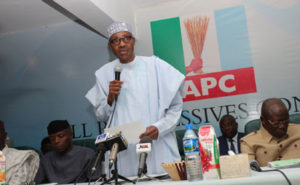 The All Progressives Congress, APC has on Wednesday commenced the vending of nomination forms for its members into various political offices. The nomination forms according to the party would end on the 10 of this month.

In a statement disclosed by the party on Tuesday, APC stated that presidential aspirants would pay N45m, N22.5m for governorship, N7m for senates, N3.850m for house of reps and N850 for house of assembly.

Read the party’s statement below: “The National Working Committee (NWC) of the All Progressives Congress (APC) in line with the provisions of our Party’s Guidelines for the conduct of Party Primaries for the 2019 General Elections as approved by the National Executive Committee (NEC).