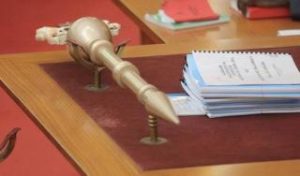 Adewumi, (Ekiti West Constituency I) in the assembly was elected on June 6, 2015 as the number two man in the Assembly.

He was removed in 2018 by pro-Ayodele Fayose lawmakers for alleged disloyalty.

The PDP lawmaker was reinstated as deputy speaker last year few days before Dr. Kayode Fayemi was inaugurated as governor.

Adewumi was earlier impeached in May 2018.

Back then, the Assembly accused Adewumi of committing several acts including personal conducts likely to bring the Assembly to disrepute, obvious threat to peace of members and obstruction of constitutional functions of ‘The House.’

He was also accused of “dereliction, desertion, abscondment and abandonment of constitutional vested responsibilities of the Office of the Deputy Speaker.”