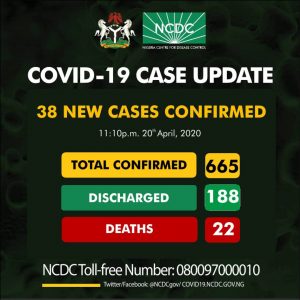 This was announced on the NCDC’s Twitter handle on Monday night.

The cases were recorded in five states, bringing Nigeria’s total to 665.

According to the breakdown, 23 were recorded in Kano, five in Gombe, three in Kaduna, two in Borno, two in Abia, and one each in the federal capital territory, Sokoto and Ekiti.

Lagos, which currently has the highest number of COVID-19 cases, recorded no case for Monday.