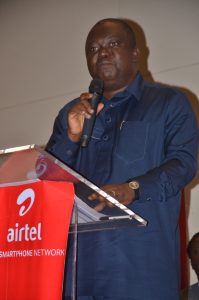 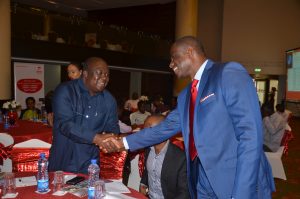 The Brila FM boss made this declaration at the launch of Airtel Touching Lives season 3 which took place on September 15, 2016 at Eko Hotels and Suites, Lagos.

While speaking at the event, Dr Izamoje gave examples of top footballers whose lives were changed as a result of giving. He stated popular sport icons like Christano Ronaldo, Lionel Messi and even Nigeria’s KanuNwankwo and Austin Jay JayOkocha who are playing their own part in giving back to society.

“The philosopher Socrates said an unexamined life is not worth living. Airtel is not just doing business but also examining the society and this is commendable because we need people to look at lives that must be helped.  Airtel has gone over and beyond its core duty through this initiative Airtel Touching Lives”.

“To support this commendable feat, Brila FM will partner with Airtel to promote Airtel Touching Lives in the media space”. Dr Izamoje said.

Izamojecongratulated the MD& CEO and staff of Airtel for this laudable project and encouraged the telco to continue doing all it takes to make a positive impact in the society. He charged Nigerians to support Airtel in their bid to touch more lives thus making Nigeria a better place.

Speaking at the event, the MD & CEO, Airtel Nigeria, SegunOgunsanya, thanked the Chairman & CEO of Brila FM. He said “We are immensely grateful to the media especially Brila FM who has chosen to help us tell a successful story of Airtel Touching Lives season 3”.

Still speaking on the initiative, Ogunsanyasaid that following the remarkable impact and successes recorded in the first and second seasons of its revolutionary CSR intervention, Airtel is motivated to kick-start the third Season of Airtel Touching Lives.

“At Airtel, we believe that to be a great company we must be good company, and we are very much committed to earning our social license – the love and acceptance of the various communities and people we serve”. Ogunsnaya said.

Airtel Touching Lives has been able to offer practical relief, succour, hope, opportunities and credible platforms to liberate and empower the underprivileged, disadvantaged and hard to reach persons in the society. Its previous seasons has seen the telco come to the aid of individuals, families and communities with various pressing issues that demanded immediate solution.

With the launch of Airtel Touching Lives season 3, well-meaning individuals are encouraged to nominate persons, families or communities by calling or texting using the short code 367. Nominations can also be sent to airteltouchinglives@ng.airtel.com as well as Airtel stores nationwide. For more information visit people can www.airteltouchinglives.com.