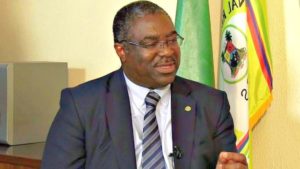 President Muhammadu Buhari has summoned the Chairman of the Federal Inland Revenue Service (FIRS), Babatunde Fowler, to the Presidential Villa Monday to explain tax collection variations between 2015 and 2018.

Specifically, President Buhari in a letter alleged variations in budgeted collections and actual takings reported by the agency within the period.

The query was conveyed under the heading: Re: Budgeted FIRS Collections and Actual Collections, with reference number SH/COS/08/5/A/301.

It was sent to Fowler on August 8 by Chief of Staff to the President, Abba Kyari, in response to an initial report on tax collections he (Fowler) forwarded to the presidency on July 26, 2019 marked FIRS/EC/CWP/0249/027.

In the letter, the president directed Fowler to explain variations by providing a “comprehensive variance analysis” for each tax item between 2015 and 2018.

The FIRS boss was also requested to respond to the query by today, January 19.

However, presidency source disclosed that Fowler was asked to explain the variations, and was not issued a query per se.

“We don’t know how the letter got to the press. Maybe people who don’t like the chairman in the organisation leaked it, but it is true that Kyari wrote the letter on behalf of the president.

“As you have seen from the content, it is not a query per se. It is just a request for an explanation. The request is based on the information supplied to the presidency by Fowler himself. He was asked to produce revenue collections over 10-year period.

“From 2010 to 2014, the FIRS surpassed its targets for each year. From 2015 to date, the FIRS failed to meet its yearly targets. So, the idea is for him to explain the situation, as raised by the records he presented. It is for him to speak, not the presidency,” the source added.

The letter was titled: “Re: Budgeted FIRS Collections and Actual Collections: Your Attached Letter FIRS/EC/CWP/0249/19/027 Dated July 26, 2019 On The Above Subject Matter Refers.

“We observed significant variances between the budgeted collections and the actual collections from 2015 to 2018.

“Accordingly, you are invited to submit a comprehensive variance analyses explaining the reasons for the variances between budgeted and actual collections for each main tax item from 2015 to 2018,” the letter reads in part.