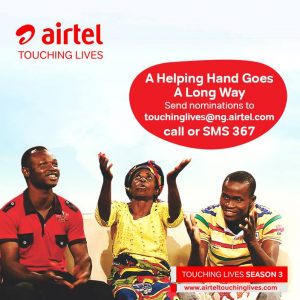 Airtel Nigeria has launched the third season of the life changing CSR initiative, Airtel Touching Lives. The initiative, which was launched on Thursday 15 September, 2016 provides an opportunity for the less privileged members of the society to get the much needed help they deserve.

The laudable CSR initiative which is currently in its third season has positively impacted the lives of several families and communities over the course of the first two seasons. With the launch of the 3rd season, the opportunity is open again for members of the public to nominate beneficiaries who they think are deserving of an opportunity to have their lives positively transformed.

How to Nominate a Beneficiary

To ease the process of Nomination, various channels have been set aside to get nominations from even the most rural part of the country. Members of the public can;

You can make a difference in someone’s life, nominate a deserving beneficiary today #AirtelTouchingLives3.