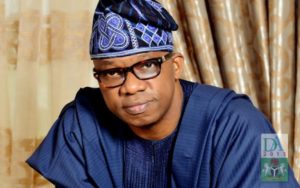 The Inter Party Advisory Council, IPAC, in Ogun State has declared that the governorship candidate of the All Progressives Congress, APC, in the state, Mr. Dapo Abiodun is not fit to govern the state.

IPAC made this declaration at a press briefing to address the alleged certificate scandal levied against Abiodun.

The Chairman of IPAC in the state, Mr. Abayomi Arabambi, however, vowed that the council will seek a legal redress if the embattled APC candidate fails to clear his name within 48 hours.

His words: “As you are all aware, the All Progressives Congress, APC, handed over their governorship ticket to Prince Abiodun to represent it in the 2019 governorship election coming up on March 2nd, 2019.

“Unfortunately, the said Dapo Abiodun is not qualified to govern our dear state for the following reasons.

“It may interest you to know that in 2015 elections, Mr. Abiodun contested the Senate on the platform of the APC and gave some facts, claiming to have graduated from the University of Ife, now Obafemi Awolowo University in 1986 and also Kennesaw State university Atlanta Georgia, USA,1998 as his educational qualifications. Surprisingly those facts are quite different from what he now stated in his governorship form submitted to INEC for 2019 general poll where he claimed he is a holder of West Africa School Certificate in his form CF001.

“Consequently, we are giving Mr. Abiodun 48 hours to clear the air and explain the reasons for these discrepancies as failure will leave us with no other option than to seek legal means for outright disqualification.”