Dangote emerges as the most admired African brand 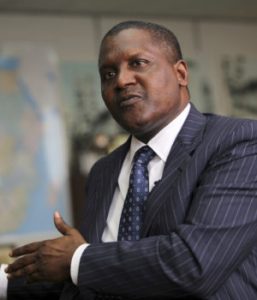 Dangote Group, from Nigeria has emerged as the most admired African brand, of African continent origin, by consumers ahead of telecommunication giant, MTN according to the South African based Brand Leadership Movement in collaboration with the Johannesburg Stock Exchange (JSE)

The Dangote brand which is also the leading brand in Nigeria came atop in the fresh ranking of 100 best brands in Africa themed “Brand Africa:100”, the sixth edition announced in Johannesburg, South Africa.

The Brand Africa 100” was established in 2010, in recognition of the growth of African brands, which were beginning to challenge global brands in Africa or lead global brands in new categories such as telecommunications.

The aim of Brand Africa is to identify, acknowledge and promote African and global brands that are catalysts for Africa’s growth, reputation and value.

Describing the brand, “Dangote”, The Brand Africa revealed that the “Nigerian industrial brand Dangote is the number one African brand recalled when consumers are prompted about the continent (Africa) of origin while the South African tele-communications brand MTN is the number one African brand spontaneously recalled irrespective of continent of origin.

The United States sports and fitness brand, Nike, is the overall brand in Africa spontaneously recalled by consumers.

The Brand Africa 100 ranking is based on a survey among consumers 18 years and older, conducted in 23 countries across Africa.  The countries, representing all African economic regions, collectively account for 75 per cent of the population and the 74 per cent of the GDP of Africa.

Chief Corporate Communication Officer of the Dangote Group, Anthony Chiejina said the management was not surprised at the ranking because the company has continuously deepened and delivered on its core values. The focus of the company, according to him, is to be a world-class enterprise that is passionate about the quality of life of the people and giving high returns to stakeholders.

“And this philosophy is driven by values, which include customer service, entrepreneurship, excellence and leadership. In any of our subsidiaries, the focus is to provide local, value-added products and services that meet the ‘basic needs’ of the populace. Through the construction and operation of large scale manufacturing facilities in Nigeria and across Africa, the Group is focused on building local manufacturing capacity to generate employment, prevent capital flight and provide locally produced goods for the people.

“The expansion of our business especially the Cement which has operations in 14 African countries including Nigeria, Benin, Ghana, Senegal, South Africa and Zambia, among others has added to popularity of our company and the products, Chiejina stated.

Brands from Europe leads the table with 40 per cent, North America at 24 per cent and Asia 19 per cent.  West Africa 6 per cent, with only Nigerian brands and Southern Africa per cent.

“Overall, the 2017/18 Brand Africa 100 list, which started out with over 15,500 brand mentions covering over 2,200 admired brands, illustrates a very diversified portfolio of categories and brands in Africa.

Thebe Ikalafeng, Founder and Chairman of Brand Africa and Brand Leadership.  Said “African brands have an important role in helping to build the African brand,” says These rankings are an important metric of the progress Africa is making in creating home-grown world-class brands that are changing the narrative on African competiveness, image and reputation and contributing to its socio-economic transformation.

“There is an incredible year-on-year consistency, with 60% of the Top 10 brands common among the Top 10 Most Admired African Brands and Most Admired Brands in Africa, led by Nigeria’s Dangote and Glo, South Africa’s MTN and Shoprite, Kenya’s Tusker and Ethiopia’s Anbessa.  Out of the 16 African brands in Top 100 in 2016/17, 6 exited and 7 entered the Top 100 in 2017/18.

“Safaricom/Mpesa remains a highly recalled ‘African’ brand among Financial Services and the Most Admired Brands in Africa.  Zimbabwe’s Econet made the most spectacular first time entry into the Top 100 at #40. After a long stay on the list despite its innumerable challenges, BlackBerry finally fell off the list as the brand exited the consumer markets.  On the other hand, Etisalat, which dropped 31 spots remains on the list of the Top 100 despite exiting Africa in 2017.

“The highest gains are dominated by apparel and lifestyle sport brands Ralph Lauren (+48), Versace (+41) and a resurgent Reebok (+43). The sports category, led by Nike (#1), remains a strong performer, due to strategic repositioning or expansion in their positioning towards lifestyle and high profile endorsements and partnerships which have freshened and broadened the brands’ appeal, particularly to youthful and young consumers.”

@@dailyrecordng
Previous Transcorp appoints Christopher Ezeafulukwe as Executive Director
Next Senate 2019: I have not dropped my ambition – Uduaghan