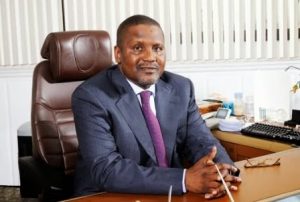 The initiative of Dangote Group in sanitizing activities of its drivers engaged in illegal haulage has continued to yield results as its National Patrol Unit has over a period of time, arrested 244 suspects for various offences inimical to operations of the company.

Còordinator of the unit, CP Magaji Abdullahi (Rtd), gave the indication at a press briefing on Tuesday, at Dangote Cement Factory in Obajana, Kogi state.

He said out of the number, 109 have been convicted and jailed while others are being remanded in prison custody for tarnishing image of the company, among them a kingpin, Samaila YAKUBU  believed to be leader of the syndicate that specialized in stealing DANGOTE Group trucks in connivance with drivers.

Samaila, notorious for terrorising company trucks along South east and South south axis was former staff of Dangote Cement Transport Operations Ibese before he was dismissed, and impersonating as Recovery Officer of Dangote Group thereafter.

The unit also observed incessant reports of missing tyres and spareparts by drivers and took necessary measures including census of such items while the trucks were being dispatched and checking the items of all the fleet on the return trip.

Abdullah called attention of the public and those who buy used tyres to the type of truck tyres of DANGOTE Group, which he said showcases DO and DI inscriptions followed by some figures and should not be patronized.

The coordinator called on security agents to support DANGOTE Group’s effort by arresting those who break  laws of the company such as reckless drivers, drivers who diverted from approved routes and those unauthorised persons who drove Dangote trucks.

The unit was established in August, 2016 to monitor DANGOTE drivers, reduce incidence of accidents by the fleet and protect road users.