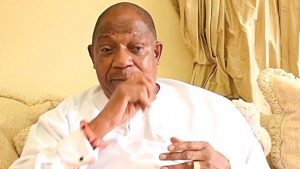 DESPITE agitation by stakeholders in the Niger-Delta region, the issue of sole administrator for the NDDC appears to have come to stay; what is the UPU’s position on the issue?

The Urhobo Progress Union’s position is very straight forward; the senate at one time appointed and approved an Urhobo man as Managing Director of NDDC; that is our position. This is a democracy; the issue of appointing administrators to fill gaps is untenable: The UPU wants that the Okumagba appointed executive, approved by the senate, be activated and should resume its rightful place. That is our progressing point; we don’t understand the reason why the man who has been interviewed and recommended by the highest law making body in the country cannot be sworn in by the Presidency.

What is the position of the Urhobo nation on the clamour by several ethnic groups for restructuring of the federation?

The UPU states categorically that whether you call it restructuring or regionalism, we should go back to the days when every region contributed  to the upkeep of the centre; that is, resources are maintained by each region, now by each state. Whether it is through farming or animal husbandry or industrialisation or education; we would contribute to what is on the exclusive list to the federal government. This is what we told President Buhari and in the new senate review committee by Senator Omo-Agege.

What is your position on the issue of State police?

UPU believes that each state should have its own police. We had it before in the form of Native Authority Police. Some have expressed concern that governors can use it to oppress political opponents; that is neither here nor there. Anyway, this country is too large to have a centralised police system. All federal systems, whether in America, India; I give a few examples; it is only in Nigeria that we have a centralised police system. The establishment, in Delta State, of Operation Delta Hawk is a good initiative. All the eight local government areas in Urhobo land have contributed their vigilance groups.

There is clamour by a section of Deltans to the effect that the rotational policy for the 2023 governorship election be jettisoned; by that policy, it is said to be the turn of the Urhobos in Delta Central. What is UPU doing to ensure power returns to the zone?

Firstly, the issue of rotation is a practice by one major political party, but it is a practice that has served us so well. It started with an Urhobo. James Ibori served as governor for eight years. After Ibori’s tenure, it was zoned to the South Senatorial District, which consists of three tribes, Isoko, Ijaw and Itsekiri and Dr. Uduaghan became governor. After Uduaghan, it was zoned to Delta North, which produced Dr. Ifeanyi Okowa. Now, it is the turn of the Urhobos who started it in 1999. Some people are saying it should no longer be based on senatorial districts, but on ethnic basis; all we can say is to appeal to our neighbours to be passionate enough to keep to the terms that served us well. It is the turn of central to produce the governor. It is an issue of persuasion; it is our place to stress the imperatives of cooperation with our neighbours that zoning on senatorial basis be allowed to survive. We want an Urhobo candidate; it is the turn of the Urhobos, but we are not compelling people that they must vote for an Urhobo person to be governor.

Will the UPU publicly back an Urhobo for the governorship seat? If yes, what form of support will the UPU give to the aspirant?

The election is just beginning and we already said that we would pray for all Urhobo candidates that hold office and once the political parties have chosen, we would take one or two and pray with them and send them forth. That is what leaders are meant for and that is what we will do.

Has the UPU endorsed any Urhobo person for the governorship seat following speculations that a prominent Urhobo governorship aspirant has the UPU’s blessing?

This question is strange to me because it contravenes the laws setting up the UPU; the UPU is not a political party, so it cannot produce a candidate; under which party? We have not endorsed anyone. What we will do is that we will pray for one or two interested Urhobos from any party. We will tell them what the Urhobo nation stands for, what we want as we send them forth.

Your predecessor, Chief Joe Omene, has continued to lay claim to your office. People, especially non-Urhobos, are confused as to the true position. Why have you been silent on the issue?

The Urhobo nation from what I understand is led by the kings and every kingdom in Urhobo land has a President-General. There are 24 kingdoms and 24 President-Generals, each of these President-Generals have pledged loyalty to UPU and all the kings are with us; in fact, we had a meeting with them recently and we will continue to interact them and the women groups (Ewheyas) are with us, youths are with us. We have the listening ears of the government of the day. What else do we want? Anyone can go to the press and claim he is the President of Nigeria. Have you been elected or followed the procedure? No! The UPU constitution stipulates that you are elected as President-General to serve for three years and may be selected for another three year spell. If your time is over, you leave for a younger person to take over. That is what we have done;, we were duly elected by the board of trustees, kings and 24 President-Generals of the kingdom.

No. In fact, one of his predecessors, Prof Tam David West, for your information, I was an oil man, summoned Managing Directors of IOC to his office at Falomo. He told us all to move to the area where we produce oil, saying if there are security issues; the IOC’S should be able to pay for security. I am aware Shell has moved from Lagos. I don’t think they have more than 200 staff in their Lagos office; they have moved from Warri principally to Port Harcourt. So, Chief Timipre Sylva telling IOC’S to concentrate in Abuja, a non-oil producing area, is nonsense. Oil companies should be near where they produce the oil and be nice to their neighbours.

How will you assess the Gov Okowa-led administration so far? Has he lived up to your expectations?

When a man is appointed into office, you wait until he finishes before you can do your assessment because it is very easy to praise him today and tomorrow something happens while it is also easy to criticise, then he does something good. I want to be patient until 2023. We in the UPU will pass judgement.

What is the UPU doing to tackle the various violent clashes between the Urhobo communities across the state?

To the two warring Urhobo communities you have mentioned, I will add a third and fourth one: the Ehwu versus Uwheru and the Evwreni and Ughelli crisis. We had a meeting today and that is why my top executives are here. We are a big nation, so there are bound to be minor differences. It is not peculiar to the Urhobo people.