Distribution of of PVCs begins mid May, says INEC 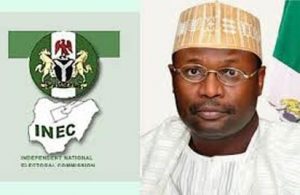 The Independent National Electoral Commission (INEC) says the distribution of Permanent Voter Cards (PVCs) to their owners will begin by middle of May. The Ebonyi INEC Resident Electoral Commissioner (REC), Prof. Godswill Obioma disclosed at a strategic security interactive meeting on Wednesday in Abakaliki.

Newsmen report that the strategic meeting involved INEC officials, representatives of security outfits involved in the conduct of election as well as the National Orientation Agency (NOA), and the National Youth Service Corps (NYSC).

Obioma said that the commission would commence the distribution of the PVCs to eligible electorate, who registered between 2017 and 2018. He urged security officials, who were yet to register, to take advantage of the ongoing Continuous Voter Registration (CVR) to register.

He further urged members of the security agencies, who transferred from other locations, wishing to transfer their cards to Ebonyi to approach any INEC office nearest to them for the transfer. He warned against double registration, noting that any double registration would result to cancellation and disqualification of the voter.

“We have concluded arrangements for the distribution of the Permanent Voter Cards to their owners and the exercise begins by mid May and will involve those who registered between 2017 and 2018. “We have begun early to plan for the 2019 elections and I want to assure you that we will do our best to eliminate factors that will compromise outcome, credibility and integrity of the elections.

“Let me use the opportunity to urge officers who have not registered to register and those wishing to do card transfer to visit any INEC office for the update,” Obioma said. The resident commissioner said that the strategic meeting was part of the early preparatory arrangements by the commission aimed at mobilising its critical partners and stakeholders.

He said that the interactive security meeting would deepen collaboration between the security operatives and the commission and boost proper security arrangements and understanding ahead of the elections. According to him, the meeting is running concurrently at the three Senatorial zones of Ebonyi including Ebonyi South, Ebonyi Central and Ebonyi North Senatorial zones.

“The briefing is called cluster briefing running concurrently at the three Senatorial zones of the state which has in attendance all security agencies involved in the Inter Agency Consultative on Election Security (IACES). “The aim is to plan properly, especially in the areas of security and the idea is to share information on the proper conduct of elections.

“The commission is making plans in earnest for smooth, transparent and credible elections and we need adequate security to ensure safety and security of INEC staff and materials,” he said. He explained that IACES had set up a security sub-committee to identify number of security personnel to be deployed to polling units and voting points. He said that security operatives that would be involved in the election would undergo a joint training programme on election security. He said the training would enable the operatives imbibe high ethical standard before the elections as well as equip them with knowledge of security strategies developed by INEC to ensure credible poll.

Meanwhile, the Commissioner of Police in Ebonyi and chairman of IACES, Mr Titus Sumba-Lamorde said security operatives would ensure that safety of voters, INEC materials and officials are guaranteed during the elections. The Commissioner, who was represented by DSP Linus Iwuanyanwu, Divisional Police Officer, Izzi Police Division, charged operatives who would be engaged in the election exercise to display professionalism and high ethical conduct. He said that IACES and the commission would address all security concerns that would be articulated in the meeting with a view to enhancing proper security arrangements before, during and after the elections.

“Security agencies will ensure proper synergy and collaboration to enhance security of INEC sensitive and non-sensitive materials including election officials during the elections,” Sumba-Lamorde said. He said the meeting was part of the Election Projects Plan and  contributions to enable the commission to effectively plan on security matters for the election.

@@dailyrecordng
Previous Lagos APC kicks against tenure elongation for Odigie-Oyegun, others
Next Finally, SEC Gives Deloitte Go Ahead on Forensic Audit of Oando