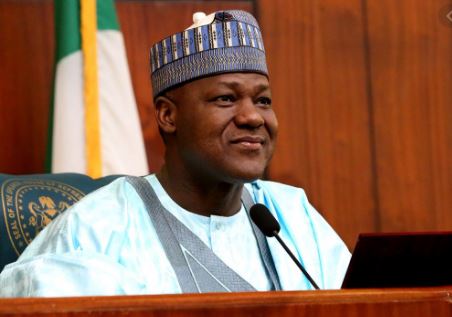 THE immediate past speaker of the House of Representatives, Hon. Yakubu Dogara, is back in the All Progressives Congress (APC).

The move, the ruling party says, is the first step in bringing back its members who left its fold in the run-up to the 2019 elections.

Dogara was at the Presidential Villa, Abuja on Friday to see President Muhammadu Buhari.

He was accompanied to the State House by the Chairman of the APC’s Caretaker/National Planning Committee and Governor of Yobe State, Mai Mala Buni.

Buni confirmed Dogara’s return to the APC after the meeting with Buhari.

Part of the Yobe governor’s brief is to rebuild the party ahead of its national convention where a new executive committee will be elected.

He told reporters on Friday that the process of regaining all aggrieved members of the party who left had commenced.

He said the party was already reaching out to others with a view to bringing them back.

“We are meeting all our aggrieved members, particularly those who have interest in coming back to the party,” he said.

He added: “They should feel free to do so. We are assuring them and there is no crime in double assurance.

He said the ongoing assignment of his committee was not just about 2023 but to ensure that the party survived the crisis that threatened its continued existence.

“We paid the courtesy call on the President in continuation of our effort to rebuild the party. We are here to see Mr. President and brief him on the developments.”

Dogara did not speak to State House correspondents, but Buni said the former Speaker “was a member of the APC and he is, because the reason he left the APC is no more there.”

Dogara was one of the APC’s influential members who dumped the party in July 2018, although he officially announced his own defection on January 29, 2019, citing “undemocratic practices” in the party.

Dogara had fallen out with the then governor of the state, Mohammed Abdullahi Abubakar, over the way Abubakar was running the affairs of the state and the party.

The Nation gathered that Dogara’s return to APC was without conditions.

Sources said the development was on account of irreconcilable differences with Governor Bala Mohammed of Bauchi State.

Although Mohammed emerged through a coalition of forces in 2019, spearheaded by Dogara, the governor has allegedly become his own man.

It was also gathered that Dogara’s return to APC might be a prelude to the defection of more PDP bigwigs.

Sources confirmed that high-level consultations and overtures have been made to some PDP bigwigs to switch camps. But the PDP leaders had not made any commitment at press time.

A source said Dogara’s defection from PDP to APC was “largely informed by local politics in Bauchi State ahead of the 2023 general elections.”

The source said some political gladiators were no longer comfortable with Governor Bala Mohammed who is in firm control of PDP in Bauchi State.

The source said: “The return of Dogara to APC is without any conditions attached in any manner whatsoever. The talks for his shift from PDP to APC had been on in the last three weeks.

“In the thick of the negotiation was a highly-respected minister who facilitated how Dogara came back. So, what happened today (yesterday) has both local and national implications.

“At the local level, it is about Bauchi State politics and at the national level, it borders on the reformation of APC and realignment of forces by the Chairman of the APC National Caretaker Committee, Governor Mai Mala Buni.

“With the cold war between the Bauchi State governor and Dogara, the ex-Speaker has lost the PDP structure in the state to the governor. He needs a stronger platform for the battle ahead in 2023 with APC fitting the bill.”

Another source said the national undertone might have added value to the decision of Dogara to rejoin APC.

The source, who was central to the return of Dogara, said the new APC leadership has initiated high-level consultations and overtures to woo influential members who dumped the APC for the PDP.

But no progress has been made other than wooing these PDP leaders, who have not responded to the plea to come back to APC.

The source said: “Just a few days ago, the Secretary of APC Caretaker Committee, Sen. James Akpanudoedehe said other factors outside the credibility of President Muhammadu Buhari would determine whether or not APC will continue to rule beyond 2023.

“This is a signal that Dogara’s latest defection might be a pointer to realignment in APC ahead of the next general election. Given his quiet nature, Dogara’s return portends the likelihood of some heavyweight politicians joining and rejoining APC.”

The Chairman of the APC National Caretaker Committee, Governor Mai Mala Buni was not immediately available when contacted.

He said:”Governor Mai Mala Buni is a real party man who understands the workings of APC and has the capacity to rebuild and turn around the fortunes of the party.

“His reconciliatory effort has built a new confidence among the aggrieved stakeholders. APC under the watch of Mai Mala Buni would record more notable politicians joining the party. There would be reincarnation in APC with a breath of a new life.”

On its part, the National Caretaker Committee of APC said the PDP was already jittery about impending mass defections from its fold to APC.

It said it was “gladdened by the return of Dogara to APC.”

The committee made its position known in a statement issued by its Deputy National Publicity Secretary, Mr. Yekini Nabena.

He said: “The recent and unintelligible rants by the People’s Democratic Party (PDP) are not unconnected to the impending mass defections set to hit the failed opposition party.

“The PDP calls for the resignation of the President. How silly! Nobody expects the PDP to provide ideas on good governance going by their inglorious past and antecedents.

“We only reiterate that the PDP stays quiet while the President Muhammadu Buhari administration clears the rot they foisted on the country.

“Nigeria deserves a vibrant, purposeful and credible opposition not the laughing stock we have been subjected to in the name of the opposition PDP.

“It is well within the rights of PDP members to abandon a rudderless and sinking ship for the progressive fold. Going by the popular axiom: Why fly like a hen when you can soar like an Eagle?

“We are particularly gladdened by the return of the former Speaker of the House of Representatives, Rt. Hon. Yakubu Dogara to the APC.

“As we work collectively to achieve the Nigeria of our dreams, we will no doubt encounter challenges along the way.

“But one thing is sure. Under the focused and sincere leadership of President Muhammadu Buhari, we are already delivering on key electoral promises of securing the nation, fighting corruption and improving the economy and livelihoods.

The Bauchi State chapter of the Peoples Democratic Party (PDP) said yesterday that it was not aware of Dogara’s defection to the APC.

The state chairman of the party, Alhaji Hamza Koshe Akuyam, told The Nation on the phone that the PDP had not received a formal notification from Dogara about his defection.

‘’We have not received any letter of him leaving our party,” Akuyam said.

“For now, we are waiting to receive a letter from him.”

The former speaker had only recently headed a screening panel of the PDP primary for the Ondo State governorship election.

When you see him with the President, it is normal because he is a former Speaker of the House of Representatives.

“Maybe there are some issues he wants to call his attention to. But when he makes his defection official to us, we shall comment on that.