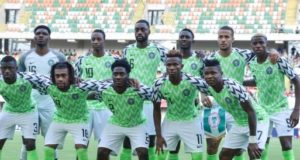 Nigeria will continue their quest to qualify for the 2021 Africa Cup of Nations when it takes on Lesotho tomorrow evening at the Setsoto Stadium in Maseru, the Lesotho capital.

Nigeria came from behind to defeat Benin 2-1 on Wednesday in their opening qualifying match. Goals from Victor Osimhen and Samuel Kalu sealed the win for the Super Eagles after Stephane Sessegnon had given Benin a shock lead in the third minute of the game.

Super Eagles German coach, Gernot Rohr commended the camaraderie among the players and stated that the team would continue the brotherhood in Maseru on Sunday.

“The good thing about the Super Eagles is good spirit and solidarity among the players because irrespective of the starting 11, we still have the same ideal and commitment,” Rohr told NationSport.

“This is encouraging for the future and we would go to Maseru with the same commitment. I am okay with the performance of the team against Benin and I am very impressed with both Kalu and Ola who were not in the team that played 1-1 with Brazil in the friendly in October.”

Meanwhile, Lesotho coach, Thabo Senong, has identified Victor Osimhen and Joe Aribo as Nigeria’s most dangerous players and admitted that the Likuena must be wary of them.

“Nigeria have very physical and skillful players. Osimhen and Aribo have done well at their clubs. Everyone knows they are very dangerous. We have to put an eye on them,” Senong said
The Likuena will be forced to make at least one change to the starting XI with Captain Marepe Basia suspended for this game due to his dismissal against Sierra Leone.

The Super Eagles have previously clashed with Lesotho during the 2008 AFCON qualifiers. Yakubu Aiyegbeni scored the lone goal in a 1-0 win at the Setsoto Stadium on October 8 2006, while goals from Stephen Makinwa and Ikechukwu Uche in the return leg at the Warri Township Stadium exactly a month later secured a 3-0 aggregate win.