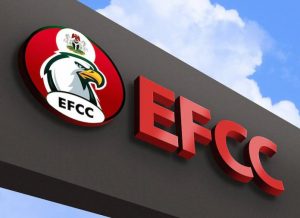 The Economic and Financial Crimes Commission (EFCC), arraigned a businessman, Bernard Okechukwu Nzenwa, alongside his company, Omega Maritime and Energy Limited, on the 30th of November, 2022 before Justice Rahmon Oshodi of the Special Offences Court, Ikeja, Lagos on a one count charge bordering on issuance of false documents.

The EFCC counsel, Mr. G.C Akaogu told the court that the defendants, on March 9, 2011, issued a false document titled: “Bond for the re-exportation of imported goods” delivered without payment of import duty, which they claimed to have originated from Guaranty Trust Bank Plc.

Their offences were contrary to Section 360(1)(b) and punishable under section 364(1) of the Criminal Law of Lagos State, 2011. The defendant, Nzenwa, who also answered for the company, pleaded not guilty to the charge.
The defendant’s counsel, Mr. Clinton Ejezie, in his oral application, prayed the court to grant his client bail. He told the court that the defendant was granted administrative bail at the EFCC’s office, and was not a flight risk.
Following his plea, the prosecuting counsel, Mr. Akaogu, prayed the court to remand the suspect in the correctional facility pending the determination of the suit.
The court directed the defendant’s counsel to file his client’s bail application before the next adjourned date and subsequently fixed February 17, 2023, for trial.
However, following the official application for the abridgement of time and affidavit of urgency, the case was called up today, December 7, 2022 for hearing of the bail application.
The EFCC counsel, Mr. G. C. Akaogu informed court that the prosecution was not informed of today’s date and the dates for 5th and 6th December that the matter came up and by the fact that the Commission was only served on 1st December 2022 and the application not ripe for hearing.
The case was therefore adjourned to Friday 9th December, 2022 for hearing of motion for bail.