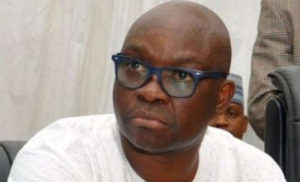 Staff of the College of Health Sciences and Technology, Ijero Ekiti, have downed their tools over the alleged non-payment of cooperative, pension and union deductions by the government.

Members of the academic and non-academic unions on Monday took to the streets in a protest and vowed not to resume until their demands are met by the government.

They, however, said the declaration of the strike was not political but purely demand driven.

“The congress unanimously declared an indefinite strike and will not resume work unless management clears all outstanding deductions.

“Demanding what belongs to us is not at the behest, command, benevolence or will of the provost or the management,” the Chairman of the Institution’s chapter of Academic Staff Union of Polytechnics, Victor Oluwaseyi, said.

Attempts to speak with the provost of the college proved abortive.

However, an aide to the state governor, Lere Olayinka, blamed the situation on the paucity of funds on the state, alleging that the Federal Government had denied them of certain funds.

“The Federal Government is deliberately withholding refunds on federal road constructions and other funds due to the state.

“The college in question draws subvention from state government purse, so the ripple effect of the financial situation is telling on the institutions too,” he said.

@@dailyrecordng
Previous APGA has over 10,000 registered members in A-Ibom —Chairman
Next ICPC to Partner INEC against Vote-buying