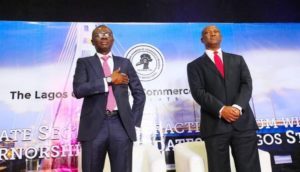 The Lagos State All Progressives Congress governorship candidate, Babajide Sanwo-Olu, and his Peoples Democratic Party counterpart, Jimi Agbaje, on Friday differed on infrastructure, health and other issues that would spur the development of the state.
The candidates spoke during the Lagos Chamber of Commerce and Industry Private Sector Interactive Forum with governorship candidates in Lagos State.
Addressing issues of traffic and transport management, Sanwo-Olu said government was a continuum and vowed to continue all projects started by his predecessor for the benefit of citizens.
He said his plan for traffic was holistic, from road repairs and construction to opening up more means of transportation through waterways and rail, to training and empowerment of traffic officials.
He said: “For years during the PDP rule, we asked the Federal Government for access to the existing railway corridor, but it was denied.
“This led us to create the Blue line railway from Okokomaiko to CMS.
“We need to complete the track because Lagos needs a transportation system outside roads that can move thousands of people daily.”
Responding, Agbaje said for 20 years of APC governance in the state, residents were still grappling with traffic congestion, especially issues with trailers parked on bridges along Costain to Apapa.
He said: “Lagos is one of the two mega-cities of the world that does not have a multi-modal transportation system.
:It is time we start thinking of multi tiered roads.
“The world is moving, we cannot afford to be different.
“The rail project has been on for too long.
“We need to have big ideas to address problems that are peculiar to Lagos.
“The way things are presently is not sustainable and it has failed to deliver the sort of impact in the lives of ordinary citizens that should be expected from an economy of Lagos’ magnitude.”
Agbaje said the sort of development Lagos requires should be anchored on improving liveability, expanding the economy and retooling it for the 21st century.
On the issue of power, Sanwo-Olu pledged to take Lagos out of the national grid within six months and provide additional 1,000 megawatts to its current level.
He said he would partner with distribution companies to ensure they upscale their power supply to the state, noting that prepaid meters would be provided to residents to ensure accountability and transparency.
However, Agbaje said he would improve power by 1,000 megawatts within his first 18 months and encourage investment in embedded power projects toward enhancing power supply.
Speaking on health, Sanwo-Olu noted that the Lagos State Health Insurance Scheme would ensure access to affordable healthcare and help build a health care structure to be proud of.
However, Agbaje criticised the present Health Insurance Scheme, saying making it mandatory was another form of taxation that has been making life difficult for the masses.
He said his administration would have significant developments in health, waste management, education, transportation management and in making use of technology to solve problems.
Agbaje promised to develop “an ocean economy” and a knowledge driven economy to enhance the economic well-being of the state and its citizens.
Besides, Sanwo-Olu said his administration would be innovative about Internally Generated Revenue in a way that would not exert pressure on the citizens.
He noted that the private sector remains the engine of economic growth and would continue to create an environment for the private sector to thrive in the state.
“As a former Commissioner for Commerce and Industry in Lagos, I know that proper collaboration with the private sector leads to more job creation, improved industrial harmony and boosts investment,” Sanwo-olu said.
Babatunde Ruwase, President of LCCI, said engaging the candidates would give exposition that would guide the private sector’s electoral choice.
He said the quality of political governance has profound implications for investment environment.
Ruwase said without a conducive business environment, there cannot be meaningful economic progress.
Share

@@dailyrecordng
Previous You Are A liar, Your Statement Incorrect, False, Police Tell Saraki
Next Dangote says Truck that caused Ekiti accident not for the company