EPL: Chelsea give condition for signing Martial from Manchester United 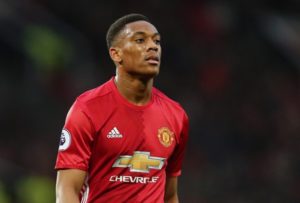 Chelsea are interested in Manchester United star, Anthony Martial and will move for the Frenchman in January, if they can offload one of their own forwards.
Martial is out of contract at the end of the season and the 22-year-old recently rejected a new deal from United.

Although the Red Devils have the option of extending his deal with a 12-month extension clause, they fear they’ll be forced into selling the player, if he remains reluctant to commit to a long-term deal.
Juventus were interested in Martial last summer, before they signed Cristiano Ronaldo and Sky Sports claim that United believe Chelsea will make their move in January.

Martial scored twice against Chelsea at Stamford Bridge earlier this season in a pulsating 2-2 draw.

@@dailyrecordng
Previous 2019: Oshiomhole hits Atiku, Saraki, reveals why there are killings in PDP states
Next Jonathan reveals those who advised him not to concede defeat to Buhari in 2015