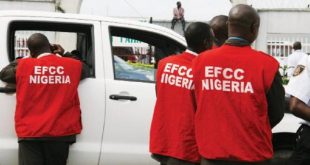 Why We Invaded Okorocha’s Residence–EFCC

The last on the arms fraud has not been heard as recent investigations have revealed that those catching the thieves have become thieves overnight as a result of the temptation that comes with the huge sums of foreign currency involved.

The Office of the National Security Adviser [NSA], currently occupied by Babagana Monguno and Minister of Defence, Alhaji Dan Ali have both been fingered in the scandal involving the Presidential Investigative Committee on Arms Procurement after the Department of State Services (DSS) arrested one of its member, Air Commodore Umar Muhammed (rtd) over the $2.1 million arms procurement scam.

It was gathered that the arrested committee member who voluntarily sang to the delight of investigators indicted both men as key influence in the syndicate.

The latest fraud involving persons serving the current government has raised concerns about the sincerity of the ongoing anti-corruption fight since the committee was itself set up to investigate the theft of funds meant for buying weapons to fight Boko Haram terrorists under the previous government.

According to a petition obtained from DSS through our source, a group of Nigerians through the Nigeria Concerned Citizen Assembly (NCCA), which expressed outrage at the involvement of high ranking administration officials in the latest scam has now asked the DSS to widen its probe as it warned that the sincerity of the agency in carrying out the investigation would be a test of the commitment of President Muhammadu Buhari’s government to its campaign promise to tackle corruption.

Our source further hinted that both men have been making frantic efforts to use some highly placed citizens to sweep the allegations under the carpet but the no nonsense Director General of the Service has vowed that full forensic investigations must be carried out and culprits brought to book irrespective of their situations.

The assembly, in a letter to the Director General of DSS asked the secret police to look higher up the chain of command to those that Air Commodore Muhammed (rtd) answered to because the fraud committed in the committee was more widespread than reported.

The letter by NCCA’s convener, Dr Abraham Odukoya, dated June 27th 2016 revealed that the Minster of Defence, Alhaji Dan Ali resides in a N3.2 billion Abuja property belonging to the arrested committee member with suggestions that he answers to the minister.

“This is a clear indication that the allegation that the duo are collaborators in crime and benefited from the arms procurement fraud may not be false after all,” the letter reads.

There are concerns that the ONSA and Minister of Defence are already using their clout and connections to block the investigation after the level of their involvement was revealed.

Both men who were totally bankrupt prior to their appointments have become millionaires overnight in less than one year into the administration, acquiring choice properties in and out of Abuja unloving to many that they have dipped their fingers into the treasury.

NCCA expressed concerns that “highly placed individuals” were out to scuttle the investigation given the concerted efforts they have been making in this regard since the arrest of Air Commodore Muhammed (rtd).

The group which backed the arrests made by the DSS insisted that the agency must conduct a thorough and impartial investigation.

“We are poised now more than ever before to kill this notion that high and mighty persons are above the law and cannot be touched even when they commit heinous crimes.

“We at NCCA are solidly behind you and call on you and the entire leadership of the DSS to continue to distinguish yourselves by ensuring that you get to the bottom of this arms procurement fraud in such a manner that no person, no matter how highly placed, is left off the hook,” it demanded.

The assembly warned that those involved in the fraud could constitute the greatest security threat to the nation if they are allowed to walk the country free with the proceeds of their crime.

“The security implication of allowing those who have looted such huge amount on of money hang around freely and perhaps even use the monies to influence decisions in Nigeria is best analysed by your office,” the letter declared.

See an NCCA petition to DSS below: 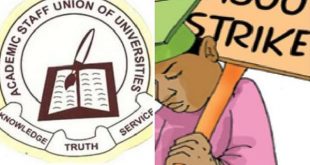