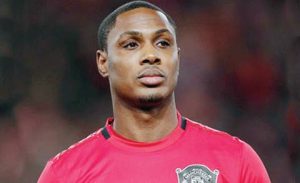 The 31-year-old striker took a pay cut in January to join United on loan from Chinese club Shanghai Shenhua.

But despite his impressive performance for the Red Devils in the FA Cup and Europa League last season, where he scored five goals in eight matches, the former Watford man has often been overlooked by the manager and has made just four appearances for United this season, playing for just 157 minutes.
On Wednesday, Solskjaer gave Ighalo his Champions League debut, with few seconds to the end of the 3-1 defeat to Paris Saint-German at Old Trafford, which sparked reactions from the fans.

Ayoade Irelouwa said, “How do you explain such treatment? You took out Cavani (Edison) in the 69th minute and brought on Greenwood (Mason), leaving an experienced striker like Ighalo on the bench. And to add to the humiliation, he decided to introduce him with exactly 90 minutes on the clock. That is very unfair to Ighalo.”
Popoola Wole added, “I think Ighalo should move away from Manchester United in January. What I saw in the Champions League on Wednesday was one of the greatest humiliations a player could suffer.”

Whenu Sunday stated, “Maybe Ole expected Ighalo to perform a magic, because how do you justify the fact that you left a striker on the bench when you were just a goal down and brought him on late into the game. That’s totally unfair.”
“For a player that decided to take a pay cut to stay at his boyhood club, rather than smile to the bank with what his Chinese club offered, I think treating him that way was very harsh,” Alex Ebhodaghe, a Manchester United fan, said.

Bimpe Bakare added, “Ighalo is smart enough to know that he is no longer needed at Manchester United because he has spent more time on the bench than on the field. The arrival of Cavani hasn’t made his situation any better. If he was still having any hope of breaking into the team, I think what happened against PSG sums it up.”