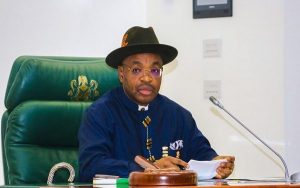 Akwa Ibom State Governor Udom Emmanuel has said his investments in the state’s power sector are being frustrated by the Federal Government’s policy which disallows states from distributing power.

Emmanuel disclosed this at a briefing at the weekend that Ibom Power Plant in Ikot Abasi generates 150 megawatts of electricity more than enough to provide at least 22-hour electricity to all parts of the state.

He also said with the state-of-the-art sub-station at Ekim as well as hundreds of transformers installed in almost the communities in the state, Akwa Ibom State shouldn’t be suffering from power outages.

The governor called on the Federal Government to liberalise the power sector to allow state governors to generate and distribute power to their citizens.  He called on the people to support the government by purchasing their prepaid meters.

“Apart from economic and security challenges, the COVID-19 pandemic that is ravaging the whole world has affected our performance.

“As a governor, you don’t control policies. If you have that limitation, you can’t perform optimally.

“There are a lot of things you will like to do but you don’t get policy support,” Emmanuel said.

While giving his scorecard, he said his administration has performed above 85 per cent in the last six years.

Emmanuel said despite the economic and security challenges that confronted the country, his administration had made maximum use of the available resources to provide basic infrastructure to the people.

The governor said in the past six years, his administration had attracted investors to the state through a good road network, and an environment conducive enough to businesses to thrive.

Emmanuel explained that there had been improvement in the area of road infrastructure, education, agriculture, rural development, aviation and health care delivery in the state.

He highlighted that the investment opportunities attracted to the state were due to the quality of good leadership, saying that it would be sustained in the next two years.