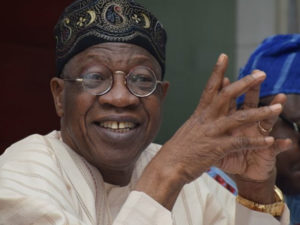 The Economic and Financial Crimes Commission (EFCC) has recovered over N540 billion through the whistleblower policy the federal government disclosed yesterday.

The revelation was made by the Minister of Information and Culture, Alhaji Lai Mohammed, at the 71st General Assembly of the Broadcasting Organisations of Nigeria (BON) in Port Harcourt.
The minister said the EFCC Whistleblower policy which was introduced in 2016 by the Ministry of Finance, recovered over N527 billion, $53 million, and £122,890 respectively.

Mohammed, who was represented by the Director, Public Relations and Protocol, Ministry of Information and Culture, Mr. Sunny Adejoh Baba, said the EFCC similarly successfully launched a major onslaught on the high and the mighty of the society, including senior military officer and their civilian accomplices indicted in shady deals, leading to the recovery of choice assets across the country.

He enjoined the media to align itself with the policies and programmes of the federal government, aimed at ridding the country of corruption, in order to free funds for development projects, which will uplift the standard of living of the citizenry.
“This effort should not be seen as the sole effort of the president or the government alone. The media has a duty to ensure that the programmes of the government, meant to uplift the lots of the citizenry, are projected as a national cause and not just as that of the president or the administration,” Mohammed said.

He also said the BON General Assembly is taking place at an auspicious time in view of next year’s general elections. He appealed to the broadcasting organisations not to yield their platforms to the purveyors of hate speech and fake news.

The minister also called on the broadcasting outfits to promote unity, stability and the development of the country.
“Anything short of this would amount to a criminal abdication of a sacred duty which could spell doom for our collective national life.

We have had enough sordid examples to learn from that we ought not to allow a repeat at this critical time of our national development.

“It is therefore of utmost importance that the media and specifically, broadcast media, does not allow itself to become a purveyor of fake news and hate speeches,” the minister said.

He restated the federal government’s commitment to allowing the press to carry out its assigned watchdog roles, even as government expects the press to be guided by national interest above every other interests.