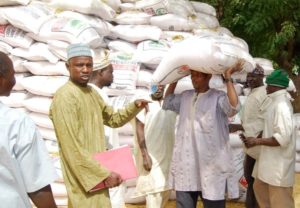 Vice President Yemi Osinbajo says 11 fertiliser blending plants with a capacity of 2.1 million metric tonnes have been revived across the country.

Osinbajo’s spokesman, Laolu Akande, in a statement on Monday in Abuja, said the vice president spoke at the Fourth National Discourse on Food Security of the Companion at the University of Lagos on Sunday.

The vice president said that self-sufficiency in food production remained a major pillar of the economic policy of the President Muhammadu Buhari administration.

According to Osinbajo, President Buhari has set a clear direction with his declaration that Nigerians must produce they eat and consume what they produce.

The vice president said that in order to improve a local blending capacity, a fertiliser programme had been launched in collaboration with Morocco.

“Through the Anchor Borrowers’ Programme, which the president launched in Kebbi in November 2015, credit is given directly to smallholder farmers, through the CBN and 13 participating banks.

“So, far credit totaling N120.6 billion has been given to 720,000 smallholder farms cultivating 12 commodities including rice, wheat, cotton, soya beans, cassava, poultry and groundnuts, across the 36 States and FCT.

“ This has enhanced traceability and enhanced productivity and yield.

“Today, but for a few drawbacks, we are confidently approaching self-sufficiency in rice production: that is from importing five million dollars of rice daily.’’

Osinbajo said that official imports were down to two per cent, adding that the Federal Government opened up opportunities for greater entrepreneurial activity in the sector as there was far greater investment in value adding services in the value chain.

He said that the Nigerian government, in partnership with Brazil, would facilitate the financing of the provision of machinery, equipment, input and services.

“At the top of the mechanisation chain are six assembly plants to be activated and spread across the six geopolitical zones.

“The assembly plants will undertake the assembly of tractors and processing equipment, as well as light manufacturing of parts which will be sent out to the Service Centres closer to the farmers across the length and breadth of Nigeria.

“The first assembly plant, among a total of six to operate, to assemble tractors and implements, will be located in Bauchi state in an already existing facility owned by a private operator.

“ It is projected that almost 5,000 tractors will be assembled in Nigeria every year.”

He said that with a substantial percentage of the world’s arable land and over half of that uncultivated, it was becoming clearer that Africa and Nigeria had the potential to become major food baskets in the world.

“China needs 2 million tonnes of hybrid Soya beans per annum for livestock feed and vegetable oil; we have not met that demand.

“Africa as a whole has also not been able to meet China’s demand for Cocoa.

“How about goat meat? 120,000 carcasses of goat meat are required weekly in different Arab countries.

“There is still a major gap in supply here as well,” he said.

@@dailyrecordng
Previous Offer Solutions, Not Condemn, Northern Groups Blast Obasanjo Over Letter To PMB
Next Nigerians spent N3b in cinemas for first half of 2019