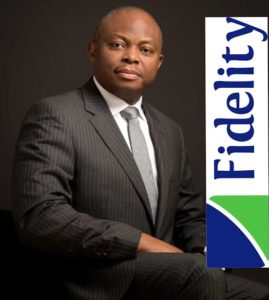 Lagos Nigeria: October 25, 2018: Fidelity Bank Plc has posted an impressive financial performance for the 3rd Quarter of 2018 and is on course to finishing strong in the 2018 financial year. Details of the 9-months results for the period ended September 30, 2018, released yesterday at the Nigerian Stock Exchange (NSE) showed a double-digit growth in revenues and profitability.

We are delighted with our 9 months financial performance with the continuing execution of our medium-term strategy which has further yielded positive results, leading to impressive growth across key performance indices including profitability, total deposits and balance sheet size etc. said Fidelity Bank CEO, Mr. Nnamdi Okonkwo.

According to him the bank has continued to grow its market share driven by significant traction in its chosen business segments such as Corporate, Commercial, SME and digitally led Retail Banking. “Gross earnings increased y-o-y by 6.9 % to close at N139.0 billion primarily driven by the growth in earning assets by 19.2 % which led to a 9.1% increase in interest income to N120.4 billion”, he explained.

Over the years, Fidelity Bank has differentiated itself from its peers by continuously introducing customer – focused digital products to grow its market share and mobilize cheaper funds. Attesting to that, its savings deposits increased by 12.9% to N201.7 billion leading to the fifth consecutive year of double-digit savings growth whilst low cost deposits, now account for 73.6 % of total deposits as shown in the results.

The growth in deposits is further complemented by its digital banking push with has resulted in having over 40% of its customers enrolled on the mobile/internet banking products and recording over 80 % of total transactions on digital platforms.

Despite the high inflationary environment, the Bank’s expenses grew by 6.5% to N50.6 billion due to increased technology investment and higher AMCON Charges. Its cost to income ratio remained relatively stable at 68.4 % compared to 67.5% in the 2017FY. Non-performing Loans (NPLs) Ratio improved to 6.0 % from 6.4 percent in the 2017FY despite a 3.4 % growth in the absolute NPL numbers with the NPL coverage ratio at 109.9 percent. Other regulatory ratios remained above the required thresholds with Capital Adequacy Ratio (CAR) at 17.0 % and Liquidity Ratio at 38.3 %

Fidelity Bank is a full-fledged commercial bank operating in Nigeria with over 4 million customers who are serviced across its 240 business offices and various digital banking channels. The bank is focused on select niche corporate banking sectors as well as Micro Small and Medium Enterprises (MSMEs).